Despite being a compact variant of the Crosskill and being chambered for the same .45 ACP round, the Crosskill Guard handles very differently, dealing considerably lower damage and (somewhat unrealistically) having a much larger magazine. The Akimbo Crosskill Guard unmodded is statistically a straight upgrade from the Akimbo Chimano 88 as it has identical statistics except for fire rate and accuracy, though its Extended Mag modification increases magazine size less and decreases Concealment more.

Like all akimbo weapons, the Akimbo Crosskill Guard's ironsights are unusuable. 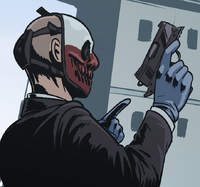 Wolf showing the gang the Crosskill Guard on the Locke and Load Day 7 header.
Add a photo to this gallery
Retrieved from "https://payday.fandom.com/wiki/Akimbo_Crosskill_Guard?oldid=179733"
Community content is available under CC-BY-SA unless otherwise noted.