The Bodhi Character Pack is a DLC pack for PAYDAY 2, released on December 3, 2015, alongside The Point Break Heists DLC, of which it serves as additional free content.

These masks are added automatically upon updating the game following the release of The Point Break Heists DLC. Once the game is updated, you will unlock 1 of the "Bodhi" mask in your inventory, but will have to get the "Bodhi Begins" from a Card Drop. The "Bodhi" mask can't drop during a PAYDAY and they can't be sold. They can both be returned to your mask stash for free, but any pattern, color or material as well as the customization fee to put these together will be lost. 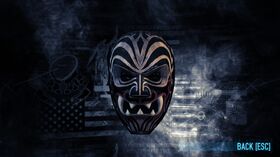 Masks have always been used in spiritual traditions that relate to deities, the divine and those chasing the apotheosis of the self. Bodhi's mask reflects the man behind it. Strong, cunning, single-minded and centered.
THIS IS AN INFAMOUS ITEM! 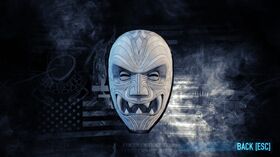 This is a clean version of the iconic Bodhi mask, before it was painted.

Never liked how the original one turned out? This is your chance to change history.
THIS IS AN INFAMOUS ITEM!

The Ex-Presidents are one of the most daring heisting crews out there. Great risk takers and brothers in arms. Their lack of fear for their own mortality brought them together and made them as successful as they are.

An Ex-President follows no rules and only adheres to the Ozaki 8, a set of trials to honor their nature.

Retrieved from "https://payday.fandom.com/wiki/Bodhi_Character_Pack?oldid=166974"
Community content is available under CC-BY-SA unless otherwise noted.