Requires the player to be part of the PAYDAY 2 Official Group on Steam. Once joined, you will unlock 1 of the "Bonnie" mask in your inventory, but will have to get the "Bonnie Begins" from a Card Drop. The "Bonnie" mask can't drop during a PAYDAY and they can't be sold. They can both be returned to your mask stash for free, but any pattern, color or material as well as the customization fee to put these together will be lost. 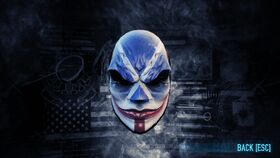 Few nations have contributed to humanity as Scotland has. In every field of endeavor - science, arts, cuisine - it is the people of this blessed land that give freely and generously. With this mask, Bonnie is determined to reverse this trend.
THIS IS AN INFAMOUS ITEM! 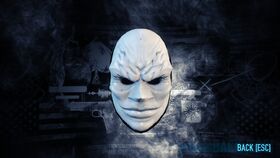 This is a clean version of the iconic Bonnie mask, before it was painted.

Never liked how the original one turned out? This is your chance to change history.
THIS IS AN INFAMOUS ITEM!

Heading into the furnace of battle requires skill, hardness and more than a little luck. Some people just have it.

Luck is an elusive quality. The ancient Greeks believed it was the design of the Gods. It isn't. It certainly exists, but it's something you can earn. It requires preparation and forethought to get your pieces in place, and maximizes your chances of a return. It's counting cards, rather than the blessing of Fortuna.

Retrieved from "https://payday.fandom.com/wiki/Bonnie_Character_Pack?oldid=166971"
Community content is available under CC-BY-SA unless otherwise noted.