Border Crossing is a PAYDAY 2 heist released on November 7, 2019 alongside Border Crystals. It is one of the first new heists to be released since the storyline concluded after the completion of the secret in The White House. Running concurrently to Hell's Island, the Payday gang is tasked with launching a second attack on a Murkywater facility in order to diminish and cut off their supplies.

While the original heisters rescue Bain in Hell's Island, Locke instructs another team of the PAYDAY gang to launch an attack on a compound owned by the Coyopa Cartel and fend off Murkywater units. The biker gang OVERKILL MC has a hidden tunnel that will lead them to the compound.

Players are given a total of 10 favors to work with in this heist. Most of the preplanning assets are conveniences to heisters, as the briefing room keys will save time in looking for it and different access ladders saves time having to navigate around the map.

In the first area of the heist, the crew must navigate through an Overkill MC clubhouse. There are 3 possible tunnel entrances on the map, on the opposite side of the clubhouse to where the crew spawns (left, right and centre). These areas are marked with orange tarps that can be removed. The correct tarp will reveal a safe door and keypad.

Locke will now prompt the crew to locate and enter the clubhouse's briefing room. This is located on the second floor and is marked by a red door. However, a keychain is required to enter the room (the door can be already opened on lower difficulties). There are several spots around the clubhouse that they can spawn in, or during pre-planning the crew can choose to place the keys in a set area. Once the keys are acquired, the briefing room can be accessed.

Upon entering the briefing room, there is a chance that the room has been rigged with C4 (exact percentages require verification). The crew must disarm the C4 if this occurs to avoid going loud, and can then search for information regarding the passcode. There is a map of the clubhouse in the centre of the room with a knife stabbed through it. The location of the knife will point to the correct tunnel entrance and can save time if players have not yet located it. There will also be writing on the map, explaining where the code is. There are 4 possible code locations:

In addition, a keycard and crowbar spawn on the table, both of which can assist for the second area. There are also 4 bags of meth at one end of the table, and a safe at the other. The safe can be opened using a drill, lock picked with the Nimble skill or blown open C4 on any difficulty. Inside the safe is a set of blueprints necessary to spawn the vault in the second part of the heist.

Once the code is entered, the crew can load any loot collected onto the vehicle inside the tunnel entrance and 'escape' to the second area.

It is also worth noting that a second keycard and crowbar spawn at the clubhouse. There are two detached, locked sheds located at opposite ends of the clubhouse, both of which require a drill or the keycard previously found to open. Inside can be either the second keycard, a second crowbar, two wooden crates containing breaching charges (needed for the loud version of the heist). All of these items will spawn, but are not necessarily in the same shed, occasionally requiring both to be opened.

If the alarm sounds at any point in the U.S. side, it is impossible to stealth the Mexico side.

The crew can enter into the courtyard of the airbase in Mexico from one of 3 possible locations, and must now avoid security guards and cartel members. Any guards wearing body armor will require pager replies, but any cartel members will not. Once the crew spawns, Locke will prompt them to locate the airplane used for escape, which will spawn in one of the two hangars.

Guards cannot be intimidated and are much more aggressive compared to GenSec/Murkywater/Private guards and will shoot on sight instead of attempting to cuff heisters.

When located, Locke will then tell the crew which type of loot to bag, with possibilities of money, coke or weapons. These loot types can spawn in the opposite hangar to the one the plane spawned in, and both warehouses. Most loot will spawn either in a wooden crate and will require a crowbar to open, or behind a security cage, although weapons can never spawn in wooden crates.

The hangar next to the plane will spawn with 3 security cages. These must all be opened using either a keycard, saw, C4 or drill (60 seconds and they will not jam by themselves). Two cameras will always appear in the South Hangar. There will also be a civilian to the back-right of the plane. He can be easily pacified however.

There are 6 security cages in the North warehouse that can be opened with a keycard, saw, C4 or drill. Alternatively, they can be unlocked from a series of monitors on the top floor of the warehouse, in the Storage Control Room. Each security cage has a number written above it, and the monitor that also reads that number must be interacted with to unlock that cage. By interacting with one of these monitors, the relevant security cage can be unlocked without the use of a keycard for 30 seconds, symbolised by a flashing green light above the unlocked cage. After that time, the cage will re-lock, symbolised by a solid red light, and require unlocking from the monitor again. Once unlocked and then opened by a crew member, it will stay open. Wooden crates are also located throughout this warehouse.

if the crew picked up the blueprints from the U.S. before heading to Mexico, a vault will also spawn underground in the North warehouse and one cartel member will always patrol through this basement. This vault requires 2 keycards to open. After both are inserted, a 1 minute timer will countdown until the vault opens. Within is the Roman armor required for the 'Two-Step Verification' achievement.

If there is only one crew member in the heist, another keycard will spawn somewhere on the top floor of the North warehouse, as two are necessary for the vault to be unlocked.

The South warehouse contains 3 security cages, all of which require a keycard, saw or C4 to open. Wooden crates are also located throughout this warehouse. Only one guard with a pager will wander the South Warehouse and either one or two stationary scientist civilians will spawn. Another civilian worker will also sometimes spawn outside next to a roll-up door that can be opened via a button from inside the warehouse. The garage doors can be lock picked or sawed opened.

One the required number of loot has been recovered, the crew must then prepare their means of escape. Locke will inform the crew that the plane needs to be refueld before they can leave, and they must connect a hose from a fuel tank through a generator, to the plane. The hangar doors must also be opened to connect the final part of the hose to the plane. Guards will now patrol inside the open hangar so take caution when moving loot to the plane. Once the hose has been connected, the plane takes time to fill up. While waiting, the pump itself can run out of fuel and will need to refuelled manually up to 2 times. If this happens, the crew must locate gas cans from somewhere around the map and re-fill the pump.

Once the plane is fuelled, the last step is to open the runway gates. The crew must open the gates by interacting with a panel somewhere in the south warehouse, and then return to the plane to finally escape and complete the mission.

After the alarm sounds, Locke will instruct the gang to locate the tunnel entrance. The tunnel will be in 3 possible locations behind large tarps. After locating it, breaching charges will be needed to blow open the tunnel door. The charges will be in either one of the two locked sheds. Players must drill through the sheds (60s drill) which can be interrupted by Murkies. The charges will be inside one of the shipping crates which will require a crowbar to pry open. A crowbar, along with a keycard, will be in one of the sheds and on the table of the briefing room, or be bought from pre-planning. After obtaining the breaching charges, place them on the tunnel door and start the detonator which will commence a 1 minute countdown. Murkies can remove the detonator which will have to placed again (does not reset the countdown). After the door has been blown open, players can secure any additional loot before taking the vehicle through the tunnel.

Although the clubhouse briefing room has a safe which can be drilled (3 minutes), blown open with C4 or lock picked, along with the aforementioned keycard and crowbar, the vault containing the Roman armour in Mexico will not be accessible once the alarm has been raised, and thus this safe can be safely ignored.

Murkywater and the Coyopa Cartel will be prepared when the gang arrives at one of the tunnel entrances and it will immediately go loud. Similar to stealth, players will need to locate the getaway plane first in one of the two hangars. After locating it, Locke will instruct the gang to loot the facility of money, coke or weapons. Loot will be inside crates which will need a crowbar to be opened or behind security cages which will need to be blown open with C4, sawn open, drilled (60s drill), or through the usage of a keycard. Weapon cases will not be in crates. You cannot remotely unlock cage doors in the North warehouse in loud as the computers will be disabled, unlike in stealth. The Roman armor vault will also be locked and cannot be opened with keycards, but picking up the blueprints in the United States will still spawn the vault corridors which could offer cover.

Border Crossing does not have an entry.

The following teasers were added on November 1, 2019, and removed sometime later at an unknown date 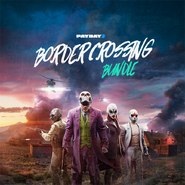 Official promotional media by OVERKILL
Add a photo to this gallery 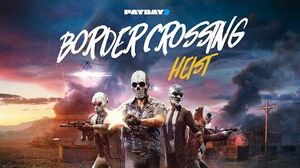 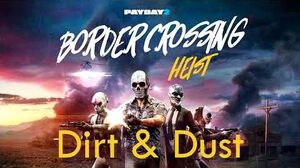