The Brothers Grimm 12G are a pair of shotguns in PAYDAY 2 added on day 5 of the Locke and Load event.

Grimm 12G Shotguns can be dual-wielded in the primary weapon slot, as the Brothers Grimm 12G Shotguns, for their greatly increased damage output at the cost of precise aiming, stability and the opportunity cost of being unable to use other primaries. All akimbo weapon modifications cost 40% extra than their normal price.

The Brothers Grimm 12G are select-fire shotguns, just like the regular Grimm 12G, the IZHMA 12G (which the Grimm 12G is a bullpup conversion of) and the Steakout 12G.

As well as being select fire, the Brothers Grimm 12G deal the lowest damage per shot out of all the shotguns in the game. Due to low accuracy, they also have massive spread with buckshot. This trait makes them a poor choice for using slugs, however. The Brothers Grimm 12G are also quite concealable possibly due to their bullpup form factor.

The immense strength of the akimbo Grimms lies in damage boosting skills, such as Shotgun Impact, Overkill, and Berserker. When combined, the damage output increases massively. This, combined with its dual-wielded, automatic nature, allows the Brothers Grimm to combine high rate of fire, room-clearing power, and large magazine size into one package. The weapon's decent concealment also allows it to benefit from Low Blow, further boosting its power and allowing it to remain viable even on the highest difficulties.

Like other akimbo weapons, the iron sights of the Brothers Grimm 12G are unusable. 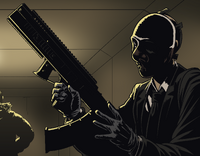 Wolf admiring the Grimm 12G on the Locke and Load Day 4 header.
Community content is available under CC-BY-SA unless otherwise noted.
Advertisement