Captain Neville Winters is one of Commissioner Garrett's top elite units, and most trustworthy men. Garret assigns Neville as the captain to command the new group of special operatives that's just been dispatched to Washington in order to stop The Payday Gang.[2]

"These special operatives have a set of very specific skills, tailored to make these criminals lives... A LIVING HELL"
—Captain Winter's introduction by Solomon Garrett.

Captain Winters has previously served with Commissioner Garrett, being awarded the Public Safety Officer Medal of Valor, the highest decoration for bravery exhibited by law enforcers, during the Boston campaign for, as Garrett described, “putting a little iron in the glove”.[2]

Captain Winters is deployed once per heist day exclusively on difficulties Very Hard or higher, and if playing in Crime.net Online, alongside a squad of 10 other elite shield-wiere "Minions" during a police assault; his presence is announced through a loudspeaker-like line. Winters and his Phalanx squad will only appear if the heist allows to do so, as not every heist supports Winters' spawn logic.

Captain Winters and his shields are, in fact, amplified versions of their sister variant, Shields, although with increased durability, a passive team-wide buff, and restricted to certain conditions.

Winters and his Phalanx squad will not actively pursue the heisters through the map the way regular enemies do. Winters and his men are scripted to move towards a specific part of the map and will set up a testudo-type shield formation, where they will stay stationary unless a heister interrupts so, in which they can defend themselves using their CMPs.

Additionally, Winters cannot be killed; after part of his squad dies, or he is critically injured down to 20% of his total health, he will cease to take damage and retreat off the level, leaving behind the other Phalanx units, and will not return again for the duration of the heist. Upon being "defeated", the assault wave will eventually return to being normal and will end.

On the other hand, the Phalanx squad is not immune and can be killed. However, they are programmed to always try to form into a closed circle with their shields pointed outwards, covering as many points of entry as possible, while flexibly adjusting depending on the amount of casualties taken and the number of units left. The formation will dissolve if there are not enough members to maintain a square (i.e. three Shields left), and Winters will retreat at that point.

Winters has a set of unique gameplay changer abilities:

The severity of Winters' effectiveness varies depending on the capacity of the heisters to reach his designated location. For example, on Jewelry Store, the map is compact enough that going outside the store is enough to find him and shoot him off. However, on larger maps, such as The Diamond or The Big Bank, heisters will need to travel across a significant portion of the map to reach him if the gang is currently doing a late-stage objective, such as securing the Diamond or gathering the Benevolent's loot respectively.

On lower difficulties, one can easily sustain fire and be able to outrun the cops to reach and defeat Captain Winters. This is not the case for Death Sentence, as a handful of shots are enough to take down an inexperienced player, so one should either defeat the damage resistance buffed ZEAL Task Force units blocking the way, or find an alternative route, either by a direct or alternative route. 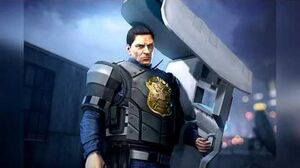 Captain Winters and his team form into a Sheltron upon entering the level, and will form into a phalanx when a heister gets within range. Like normal Shields, it is still possible to outflank them through sheer speed, or have one heister draw their fire while the others engage from a distance.

Sniper rifles and other AP weapons are still able to punch through the elite Shield units. However, their large health pools make AP weapons significantly less effective. The 10% damage cap mentioned above also makes some high-damage sniper rifles, like the Thanatos .50 cal, less efficient than expected. However, the 5/7 AP pistol doesn't fall victim to the damage cap because of its relatively low damage for an AP weapon. This combined with its high fire rate and large magazine size compared to the sniper rifles makes it one of the most powerful weapons in the game against Captain Winters and his team.

Sentry gun on AP mode is another good choice, but you have to risk yourself to place a turret in front of him.

Explosive projectiles aimed at the top of the modified shields will sometimes bounce off, potentially back towards the players themselves. Explosives that do land, however, will deal increased damage and quickly injure Winters and/or kill his men. To maximize efficiency, it is highly recommended to toss a frag grenade when the Captain and his men are moving. They are the most vulnerable at this stage as the operatives notably have space between them, creating large openings for heisters to throw grenades. Otherwise, do not waste a frag grenade if the Captain (and his men) have their shield(s) aimed at a user as the grenade will bounce off, reducing its potential.

The GL40 and Piglet are both highly effective, while the HRL-7 more or less becomes inefficient due to the damage limit nullifying much of its potential, though it is almost always an instant kill anyways, at least on Overkill difficulty and below. However, the HRL-7 is somewhat popular among some heisters as it can quickly drive off Winters if used properly.

The Judge, when loaded with HE Rounds can force Winters to retreat very quickly if fired rapidly at the shield formation when under the effects of Swan Song/Bullet Storm.

Explosive Arrows fired from an English Longbow will detonate on impact and when combined with the critical bonus benefits from Low Blow can eliminate the Shields in a matter of seconds (and accurately from long range, with minimal risk to the player as the projectiles cannot be shot from mid-air), making this an extremely effective tactic of dealing with Winters and his men.

A relatively "cheap" method (in terms of not spending cash to gain access to explosive-tier weaponry or using ammo from said weapons) is to deploy sensor-mode Tripmines where Captain Winters and his units will camp. When they take their position, a player can shoot said tripmines and inflict damage on Winters. This is not entirely foolproof however, as a player will often be required to backtrack or travel around, expose themselves to enemy gunfire, and take time to deploy the mines.

Although fire weapons do not stun Captain Winters in the way they do to other enemies, they are still somewhat effective as several of Winters' men will be caught in the area of effect and will suffer damage over time. Molotov Cocktails are notable in that they are the most effective throwable weapon to use against Captain Winters, and the flamethrowers also have some use. Grenade launchers can be loaded with incendiary rounds, although this is arguably less useful than the standard explosive ammunition.

Players attempting to drive off Captain Winters using conventional weapons will be well-served to work together much in the same way they would to kill a standard Shield. One player should draw Winters' fire while another circles around to the exposed flank, and deals damage. As with all enemies, it is beneficial to aim for the head.

If using a Shotgun/speed build, sprinting around the entire shield formation and firing into the officers heads seems to be incredibly effective. It is unknown, but testing shows that the shields take around 1,000 damage from being hit with a Steakout 12G in the head, seemingly nullifying the 10% maximum damage, possibly due to the presence of multiple projectiles.

A grinder build seems surprisingly effective in handling the shields, especially if paired with a shotgun, allowing the player to sprint around the enemies and blast them with shotgun fire, ignoring practically all the damage and swiftly dispatching the enemies, getting to Winters quickly and decisively. 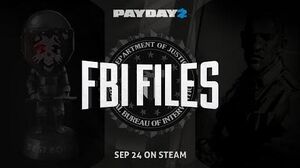