"This one is a hit on the Teuer Dealership, high class joint."
—Bain offering the heist

The Car Shop is a heist unlocked during the Hype Train Event after reaching 900,000 gallons of "Hype Fuel", which was released on March 18 2015, during the Spring Break event (day 6). The heist is contracted by Bain.

The Car Shop is contracted through Bain by an unknown party. In this heist, players have to steal one or multiple luxury cars by stealthily accessing the car keys, and then escape by driving the car through an underground highway.

Similar to Shadow Raid, this mission is considered a stealth-only mission, as a timed escape will be triggered upon going loud.

In order to escape with the cars, players must complete three objectives: enter the manager's office to discover who the newest IT technician is; hack the said Technician's computer to unlock the key storage room; and place four charges on the road opposite, so Bain can blow an escape route into the underpass below.

Spawning outside at a southern corner of the map, players can access the building from four points: the main entrance, which is highly visible and has a high presence of guards; the western side, a metal security door which leads directly into the bottom floor IT offices; the north-eastern side, another metal security door that contains the maintenance stairway and access to all floors; and the north side, which has an external spiral staircase directly to the roof. Within the store and in front of the main entrance, there is a staircase that leads to the 2nd floor but a stationary guard will always be present at the base. Going through it will force a player to mask up, even if that player was not detected nor the heist has gone loud. Another option is the rear of the building can only be accessed externally by passing through the side road to the west or employee parking lot to the east, both of which have electronic gates that must be rewired open (8 seconds).

In order to access the manager's office (always upper floor, eastern side) players must either collect the keycard from the manager himself, or smash the window to his office and climb through it (triggers the alarm). Examining the whiteboard, the next step is to find the Technician's PC and hack it (99 seconds), which will either be in the office opposite to the manager's office, in the office in the back of the bottom floor, or at the office overlooking the entrance. If the alarm has sounded at this point, it is highly recommended that one player head out to place the C4 rather than wait for the hack to finish.

Once the hack completes, players can enter the key room, which will be in near the reception on the bottom floor or adjacent to the upper IT office. After grabbing the keys and placing the C4, Bain will detonate the road outside, allowing players to drive straight into the escape route opposite the dealership. It is highly advised that players exercise care when escaping, as the amount of time to reach the docks can vary greatly between attempts. With the car(s) parked and exited, all players must rush to the escape van before the point of no return hits zero.

Note: This method no longer works on PC after Update #167. Planted ECMs will now halt hacking progress on computers within range until they expire.

A well coordinated team of 3 with ECM Specialist aced and ECM Overdrive basic can quite easily complete the heist by brute force, even on Death Wish. Mask up as soon as spawn in, and place down the first ECM, time it so the ECM goes down as you enter the front door. Now kill everyone in the store, take great care when you shoot to not hit any windows or display cases, as they will set off the alarm, dooming the heist. Guards are a priority as their shots will sound the alarm if they hit alarmed glass.

Have one player assigned to finding and killing the manager, as this needs to be done very quickly, within 25 seconds is great. Once everyone is dead the other 2 players should move to the offices on the first and second floor respectively, and wait for the name of the computer needed hacking. The computer hacking should be started before the end of the second ECM, preferably within 45 seconds.

As the computer will take 99 seconds to hack, now it's just a waiting game. Be sure to communicate when the ECMs go down so the chain can be upheld, as any mistake will set off the alarm. Since the computer will take 3 ECMs to hack, and you used about 2 to get the computer up, that will leave the team about 30+ seconds to place the C4. It can be done alone but if the entire team places the C4, getting back inside and getting keys can be comfortably done within the time limit, leaving the escape the only thing left. If you get a 4th player carefully timing the different parts is no longer needed.

The Teuer dealership had recently received a shipment of the latest model, the Falcogini. The dealership building is a very open construction with many ways in and out. The robbery of the Falcoginis took place early in the evening, while the dealership was still open. Further, it appears that an explosion near the dealership allowed the thieves to avoid the busy rush-hour roads and into deserted tunnels.

My Notes: The Payday gang are almost as dangerous behind the wheel of a car as they are behind the barrel of a gun. We’re going to need to invest a lot more in pursuit and interception if we intend to deal with the Payday gang on the road.

"A scale model of a Falcogini. Yes, you once stole a real one. Drive in style."
—Trophy description

UNLOCK CONDITION:
Finish the Car Shop job on any difficulty.

"This is an homage to the discreet power of the ECM jammer. Not that you needed one, that time at the Car Shop."
—Trophy description

UNLOCK CONDITION:
Successfully complete the Car Shop heist with a detection risk of 70 or above, without using ECM Jammers.

The staircase to the 2nd floor 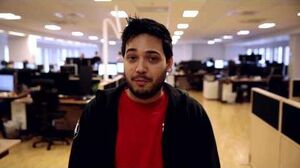 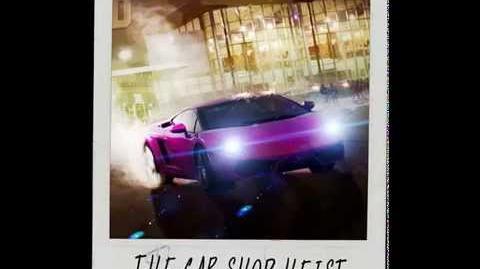