The Chimano 88 pistol is a secondary weapon in PAYDAY 2. Along with the AMCAR, it is one of the two weapons players start the game with.

As of Update 203.1, the Chimano 88 is a viable alternative to other weapons of it's tier, boasting an unmodded fire rate of 600 and a slightly higher damage of 37. That being said, it still needs skills to make up for it's mediocre base stats.

Interestingly, the Chimano 88 post-update is superior in every stat compared to the M13 9mm, besides the slight threat difference.

A preview of the new Chimano 88

A close up of the markings of the new Chimano 88

A preview of the old Chimano 88.

Inspecting the left side of the pistol.

Inspecting the right side of the pistol.

Chimano 88 used by the NPCs. 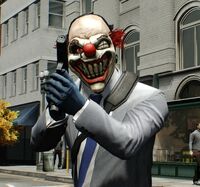 Player wielding the Chimano 88.
Add a photo to this gallery
Retrieved from "https://payday.fandom.com/wiki/Chimano_88?oldid=189163"
Community content is available under CC-BY-SA unless otherwise noted.