"Civilians are an asset; you kill them, they're gone."
—Bain warning the crew of the risk of killing civilians

Aside from law enforcers, most of the NPCs encountered in both games are civilians, innocent bystanders who may be present when a heist begins.

A large number of civilians dot the many maps in both PAYDAY: The Heist and PAYDAY 2, most usually in heists where stealth is the main approach where they pose hindrances to the crew by way of detection. Unlike guards and cameras, civilians cannot detect a player in casing mode, though will quickly panic at the earliest sight of one with a mask on and weapons out, and cannot be pacified if fully alerted. Panicking civilians will usually either seek out the nearest viable panic button, call the police, or simply run outside the map boundaries where an alarm will inevitably be raised. As an alternative to killing poorly placed alerted civilians, some civilians on certain maps' frequency to run away can be exploited in order to get them into a more favorable position.

Players may shout at civilians to intimidate them and get them to lie on the ground, or produce any kind of noise if they have Stockholm Syndrome which gives the same result. This temporarily gets them to stay down in one spot, keeping them out of the line of fire or delaying their attempts at contacting the police, though if not kept a close eye on they will eventually rise up again and resume their phone call(s) or race towards the nearest source of alarm. Civilians on the ground can be restrained with cable ties to render them immobile until moved by the players.

The players are discouraged from killing civilians; collateral damage will immediately deduct funds from the player's spending cash (regardless of whether the heist is completed) and add a trade penalty to that player if he or she goes into custody. To further complicate matters, the civilians have mindless AI, and tend to run around randomly whenever there is gunfire. This makes them a significant liability, as they may run towards shooting players, stand up in front of shooting players, run through trip mines, run in circles around police, and perform other actions that can cause them to accidentally be killed and penalize a player.

In certain heists in both games, there are special "VIP" characters whose presence are vital to the success of the mission, and with some exceptions cannot be harmed by any source. Heists where VIP characters appear are listed below:

Civilians are completely absent in the following heists:

While civilians do appear in Rats Day 1 and Cook Off, they are scripted to always die before the players can reach them and thus can't be taken hostage.The civilians that may appear in Safe House Nightmare can't be shouted down and taken hostage but can be killed, and a civilian does appear in Undercover and can be killed but cannot be reached. The receptionist in Reservoir Dogs Day 1 is stated to be a civilian and uses the model of one, but pulls a Chimano 88 and fights the player when the alarm goes off and is rather considered a reskinned police officer. She can even be dominated and converted like a regular police officer with the necessary skill.

Cable ties are used to take civilians hostage. When civilians are ordered to lie down, a player can use cable ties to tie them up. This stops the hostages from running away and possibly alerting the police.

In both PAYDAY: The Heist and PAYDAY 2, each player originally starts out with 2 cable ties but it is possible to get more by getting the respective upgrade(s). In the original game this is done by investing in the Assault tree; whilst in PAYDAY 2 this is done by buying the Forced Friendship skill, increasing the amount of cable ties to 6.

When a civilian is tied, they will be unable to alert the police and unable to move, and must wait for a police officer to free them. In PAYDAY: The Heist the amount of hostages is displayed on the bottom of the screen, while in PAYDAY 2 a number in the top right of the screen will show the number of cable-tied hostages the crew has secured. Maximizing the number of cable-tied hostages will grant the crew a variety of benefits such as:

In PAYDAY 2, cable tied civilians can still be moved around by interacting with them, thus enabling the crew to reposition them in an area where law enforcers will have a hard time getting to in order to prevent them from being rescued, or simply to move them out of the line of fire/hot zones where accidental civilian casualties can occur. To order moving civilians to sit down, either move far enough away from them or interact with them again.

Player can tie down civilians, and civilians only, by interacting with them while standing next to them. Civilians must be intimidated into lying down first by shouting at them or making noise with Stockholm Syndrome. Tying down a civilian takes 2 seconds without skills and 0.5 seconds with Forced Friendship Basic.

Tied civilians cannot move and, hence, cannot use their phones or panic buttons to raise the alarm. If a camera or any person spots a tied civilian, they will become alerted and attempt to raise the alarm. While alerted civilians can be tied down and guards can be dominated or killed, a camera that has fully spotted a player will inevitably raise an alarm, whether or not it is destroyed or the camera operator is killed.

Law enforcement will spend time and effort trying to free civilians. Hostages delay the assault waves. They can also be traded for players in custody between assault waves.

To tie a civilian, player needs to have at least one cable tie left. The cable tie is used up upon finishing the action and cannot be retrieved even if that civilian is subsequently killed or freed.

A hostage is a civilian who has been restrained with cable ties or a law enforcer who has been intimidated. They are a means of rescuing crew members from police custody.

In an active combat situation, the presence of hostages can help delaying the eventual assault wave, or dispersing the enemy's main force during the shootout, as active police forces will prioritise rescuing hostages over engaging the crew, removing their cable ties when they move near the hostages.

If a civilian hostage's cable ties are removed, they will attempt to flee; however, a player with more cable ties can recapture them. In PAYDAY: The Heist, if a security guard or law enforcer is uncuffed, then he cannot be taken hostage again and will resume attacking the crew.

A cop who has been taken hostage

In PAYDAY: The Heist, the only civilian related upgrade relates to cable ties;

In PAYDAY 2, through the use of certain skills, the behavior of civilians can be altered to produce different results, with effects ranging from reviving downed players, giving them ammo, or simply require less cash to "cleanup" when killed.

Note that the 50% longer intimidation is part of Forced Friendship instead.

A dock worker civilian in Day 2 of Watchdogs. 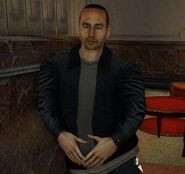 "Bobblehead Bob", a recurring civilian on most heists.

A female civilian sitting on air in Four Stores