The Clover Character Pack DLC is the fifteenth DLC pack for PAYDAY 2, and is also the first purchasable character DLC. Released on December 16, 2014, it is available for purchase for $2.99 USD on Steam. It was released alongside The Diamond Heist DLC.

Once you have bought the DLC, you will unlock the Clover mask in your inventory, but you will have to obtain the Clover Begins mask via card drops. They can be returned to your mask stash for free, but any pattern, color or material as well as the customization fee to put these together will be lost. 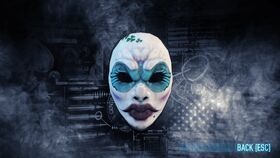 Clover's mask represents what Clover both fears and hates most of all - wearing a mask as your normal face. The surgically-shrunken nose, the botox'd lips and the expression of all-consuming vanity and self-obsession - all are symbols of fear and weakness, twisted into a horrifying parody.

THIS IS A CLOVER CHARACTER PACK ITEM! 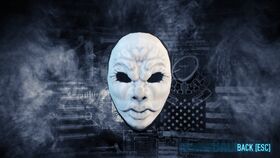 This is a clean version of Clover's iconic mask, before it was painted.

THIS IS A CLOVER CHARACTER PACK ITEM!

The natural dexterity of the Burglar has benefits beyond merely breaking and entering. Being nimble allows the burglar to pick locks, bag bodies and answer pagers faster. They are also harder to hit in combat. They stay alive by staying out of the way.

This physical conditioning also gives burglars a high tolerance to pain, and they are able to shrug off wounds quickly.

Retrieved from "https://payday.fandom.com/wiki/Clover_Character_Pack?oldid=175475"
Community content is available under CC-BY-SA unless otherwise noted.