Several fictional companies appear in the PAYDAY universe, some appearing only in PAYDAY: The Heist and others crossing into PAYDAY 2.

GenSec Industries, or GenSec, for short, is a private security company that designs security systems including security doors, alarm systems and offers security service including security guards and armored convoys. GenSec also manufactures various types of body armor, one of them being the Flak Jacket.

The Garnet Group deals in jewelry and art. Its CEO and namesake is Mr. Garnet. The crew completes a heist (Diamond Heist) in its headquarters, which is located in a 23-story urban building and contains a vault full of diamonds and jewelry. In Jewelry Store and Ukrainian Job, you can see boxes in the manager's office with Garnet Group's logo on it.

Also known as Franz Jaeger and Franz-Jäger, this company provides cheap but popular security measures for many of Washington D.C.'s establishments. Their most prominent product is their line of safes that ranges from small 50x50cm security boxes to large, reinforced ones like the one seen (and eventually blown up) in Counterfeit. The company likely manufactured the common black security cameras as well, seeing how easily they can be destroyed like the safes.

Their products, while widely used, are not known for their durability (save for the Counterfeit safe) and pales vastly in quality when compared to their competitor Titan (see below), whose products are more sturdy and aesthetically pleasing but likely cost more as well, thus limiting their use. True to this fact, Frank Yaeger products are almost completely replaced/superseded by their Titan counterparts on Mayhem+ difficulty.

The safe in Counterfeit, one of the more sturdy products of the company.

Murkywater is a private military contractor first appearing in PAYDAY: The Heist, and again in PAYDAY 2 in numerous heists, some with indirect involvement.

They are an overall shady company, moving all sorts of contraband, frequently stolen by the Payday Gang.

At the end of The White House, Murkywater has declared bankruptcy.

The Pear Store is an electronics store specializing in consumer household electronics such as laptops, digital devices and headsets. Their stores are found in Four Stores and the Mallcrasher mall.

Twenty-Four Seven is a convenience store. It can be found in Four Stores and, the Street Escape, as well as the Get the Coke tutorial heist.

White Mesa is a company that specializes in security systems as seen in Counterfeit and apparently also for the police. The company's technology was also mentioned in the description for the Improved Combined Tactical Vest.

Time Out! is a provider of Coffee and other confectioneries in the DC Metro area, perhaps even further. It advertises in numerous places throughout DC, and has numerous Cafe areas in DC, with a wide appeal to the "Hipster" community of DC, as referenced by Bain.

Time Out! Cafe, as seen in the Diamond Store heist.

Time Out! Cafe, as seen in the Four Stores heist.

Another angle of the Four Stores' Time Out! Cafe.

Time Out! Cafe, as seen in Cafe Escape.

Time Out! Cafe, as seen in Transport: Crossroads.

Time Out! Cafe, as seen in the Mallcrasher heist.

Time Out! Cafe, as seen in the Jewelry Store heist.

DC is one of the major clothes companies in the DC metro area, with stores in and around the DC area, including in many of DC's Malls (the Location of the heist Mallcrasher), with many fashionable suits and evening attire available in the street shops.

A company who owns the Mallcrasher heist's shopping mall. They are apparently somewhat high in standing, as many large companies place their shops in Shield premises.

The Shield logo in the front of the mall.

Harvest & Trustee is a bank company who is presumably the primary bank in DC. Since it owns the bank seen in Bank Heist, day 3 of Firestarter, and also all of the ATMs seen throughout the game, Harvest & Trustee appears to be the only, or at least most prominent, banking group from PAYDAY 2. Various signs located around the bank display the company slogan: "With you all the way". The police notes that the group is insured by the federal government and thus have lax security procedures, much to Commissioner Garrett's disgust.

They do have branches outside of Washington D.C. like in New York.

Another view of the Harvest & Trustee Branch.

Falcogini a premium provider of luxury sports cars and other top of the line cars, with car dealerships around DC. Their car dealerships can be seen in Mallcrasher, Hoxton Breakout, Transport: Downtown, Diamond Store, and the Car Shop, where it becomes the target of the Payday gang. Their advertisements can be seen in various places throughout the DC Metro Area.

Falcogini's presence in the Shield mall.

Titan is a security company which provides surveillance and passive security measures for GenSec, they offer top-of-the-line security measures in comparison to their cheaper and more popular competitor Frank Yaeger. Using state of the art materials, their devices are protected against explosive devices and most aggressive methods of sabotage, rendering them nigh-indestructible. The company's motto is apparently Suck It (likely directed towards criminals).

They appear to have expanded their business internationally as their cameras can been seen in Mexico (Border Crossing and San Martín Bank).

Popular Titan products include the highly-secure Titan Safes and the indestructible Titan "SecuriCams", both of which are highly prevalent on Mayhem+ difficulty as part of the Premium Security plan, however the Benevolent Bank curiously lacks such security measures. This is no longer the case as Update 199 has "bug-fixed" it. 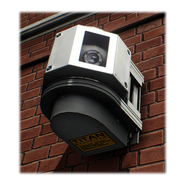 Omni Exports is a shipping company. It is one of the four possible companies responsible for transporting the voting machines for the DC mayoral election in the Election Day Heist.

Kranich Global Import & Export is a shipping company. It is one of the four possible companies responsible for transporting the voting machines for the DC mayoral election in the Election Day Heist.

Posters of the company can be seen on the walls of the Capitol Savings Bank in Plan C of the Election Day heist. A Kranich office can be seen in Diamond Store.

Avalon Logistics, or simply Avalon, is a shipping company. It is one of the four possible companies responsible for transporting the voting machines for the DC mayoral election in the Election Day heist.

Hefty Shipping & Transport Ltd. is a shipping company. It is one of the four possible companies responsible for transporting the voting machines for the DC mayoral election in the Election Day heist.

Schäfer & Gewehr GmbH is a German weapon manufacturing company. It is the fictional counterpart of "Heckler & Koch GmbH". Weapons developed by Schäfer & Gewehr are the Bootleg, Compact 40mm, Compact-5, Contractor, Gewehr 3, Jackal, Little Friend 7.62 and M13 9mm. They typically have non-copyrighted names in-universe, as can often be seen printed on their sides. These however, like their parent company, are liable to be renamed again themselves when acquired for use by the Payday Gang.

Since it's based on H&K, the Arbiter, Brenner 21, Interceptor .45, JP36 and SpecOps are most likely developed by SG as well, though these weapons do not show any "SG" markings.

Not much is known about this company, aside from the fact that they apparently produce compound bows and are in some way associated with Murkywater, as crates with D.E.C.A logo can be seen in Henry's Rock heist.