Diamond Heist is the fifth heist on the list, and cannot be played on Easy difficulty. 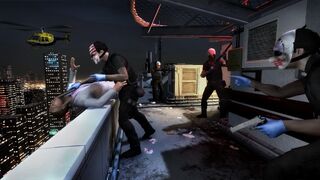 You and your team begin at one of the preset spawn points. There are three highlighted alarm boxes onto which you must plant a hacking device. It is recommended that you attempt to do this without being caught by any of the twelve patrol guards, because the more devices planted before being detected, the easier the heist will be.

A patrol guard will trigger the alarm if a player goes within his cone of vision for a brief period of time (1.5 seconds), he hears gunfire, or is attacked. Sprinting will not alert the guards at any range. It is possible to sprint directly in front or past a guard without them noticing, but this is ill-advised unless there is no other option. Any glass pane near a guard will trigger the alarm if broken.

Players should pay attention to the flashlights and radio chatter in order to detect a guard without actually seeing him. Each guard's cone of vision is quite short: about as far as his flashlight's range. Players can highlight guards for approximately 10 seconds and see them through walls during that time by shouting with their crosshair on the guard. Each guard frequently makes 90° or 180° turns, and occasionally stops walking for more than 10 seconds at a time. Most of the guards only patrol one floor, but some of them travel between the 23rd floor and the roof.

Civilians in the dance room can trigger the alarm if a player comes too close. Players cannot ascend the staircase next to the dance room while staying undetected, but can descend it only if they jump over the railing from the far side at the cost of some health. Players can also run around the dance room as long as they hug the exterior wall of the building.

A melee attack or silenced weapon (B9-S or Mark 11) can be used to destroy cameras; however, the alarm will be triggered if a guard is too close to a silenced shot, and cameras do not appear to have any effect during the stealth phase.

In addition to planting the hacking devices, you may also wish to steal some of the ten sapphires found in display cases throughout the building. However, you must remain undetected, because unopened cases seal as soon as the alarm is triggered.

Each hacking device that is planted after the alarm is triggered requires four minutes to complete the process, and must be occasionally "reset" – at which point it will beep and be highlighted in orange. The team must fend off assault waves in the interim.

Head down to the bottom floor and enter the code. The probability of the code working is proportional to the amount of progress that was made while in the stealth phase, with a high chance of success if the code is entered in the stealth phase. If the code does not work, then the alarm will sound immediately and there is no longer any point in staying quiet then you will need to start searching for the CFO. If it does work, then the team can easily collect all the diamonds without breaking a sweat.

Search for the CFO, who is hiding either in a closet below the fitness center by the edge of the building, or next to the rectangular stairwell on the 23rd floor. You cannot find the CFO until you are given the objective to find him because the door he is behind remains closed until the objective is active. You must order him up to the roof, and onto the helipad. Once his orange outline disappears, the team may move to a more defensible location, such as the stairs next to the helipad. After some negotiation, the CFO will either give you the code, or refuse and force you to search for Garnet's son, Ralph. If he refuses, Bain kills him by dropping him from the chopper and into the glass dome above the atrium. The probability of the CFO providing the code is proportional to the amount of progress that was made while in the stealth phase.

Next you have to find Garnet's son, Ralph. He can usually be found on the roof, or sometimes in the stairwell next to the helipad on the roof. Once you find him, order him onto the helipad, wait for the helicopter, and wait for your contact to get the codes. Garnet unlocks the vault, but there is a small delay while the vault's timelock expires, which takes between 30 seconds to 3 minutes.

Go into the vault, on the bottom floor, and enter it. At this point, you may be able to attempt the "I pushed the button and lived" achievement.

Shoot or melee the glass displays in the vault to take the gems. A faster strategy is to use the GL40 to smash all four displays at once on each side of the room, and reload while picking up the jewels. Bain usually tells you to only steal the center ones and run, but there is plenty of time to take them all.

In Diamond Heist there is no deadline for escape objective. At this point, you may wish to attempt the "Are you ready yet?" achievement.

Go back to the roof while looking out for the escape marker (an orange exclamation point). Most of the time it will be on the roof, but occasionally it will be on the helipad across from the vault; in this case, you must either go back down or wait for Bain to make another trip, which would take 1–2 minutes. Alternatively, you can wait in the vault until the escape marker appears.

There are 18 cameras: 11 on the 22nd floor, 3 on the 23rd, 2 just inside the main vault and 2 in the big diamond vault. Destroying cameras does not effect stealth. Instead, several sets of cameras have specific effects:

Are those the blue ones?[edit | edit source]

Collect all ten sapphires during the Diamond Heist on Hard difficulty or above. You will have to have played the heist from the start.

For stealth tactics, see above. Each sapphire is found in a glass display case, which locks via a metal shutter as soon as the alarm is triggered. Before a sapphire can be stolen, the player must activate its case and wait five seconds for the sapphire to surface. Once a case is open, it will not close, even after the alarm is triggered; thus, the safest way to unlock the achievement is to open all of the cases whilst ignoring the sapphires until the last case is open.

Complete the heist on hard or Overkill difficulty after bypassing all three alarm boxes without being detected. The achievement will still be awarded if the alarm is triggered between the last alarm box being bypassed and the code being entered. For stealth tactics, see above.

I pushed the button and lived![edit | edit source]

Steal the big diamond and escape on Overkill difficulty or above with you and all your teammates alive. You will have to have played the heist from the start.

After opening the vault, see if there is a door on the right side of the vault. The door will be there on most playthroughs; it is independent of whether or not the alarm boxes were hacked stealthily, and whether or not the codes work. If the door does not exist, then you cannot unlock this achievement on this run.

If the door exists, then push the red button on the door to open it, and refrain from stealing all the diamonds in the center of the vault so that you do not summon the never-ending assault yet. Walk up to the glass window inside so that the glass cutter spawns, then retrieve it from the crew's spawn point (it will be on the floor, glowing yellow) and attach it to the window.

The glass cutter requires exactly four minutes to finish cutting. It will break if you shoot the window or allow enemies to shoot the window, so defend the main vault during this time and position yourself so that enemies will not accidentally shoot the window.

The easiest way to unlock this achievement is to access the vault stealthily; restart if the codes do not work. Once the big diamond has been found, remain hidden, retrieve the glass cutter and wait it out while hidden. As long as the players remain hidden and all the cameras in the vault are destroyed, the police will not pursue the gang. Do not steal the diamonds in the center of the vault until the big diamond is acquired.

Are you ready yet?[edit | edit source]

Get the helicopter pilot to fly back for you seven times. It can be earned simply by surviving the assault for long enough after stealing the diamonds in the vault. The achievement is unlocked as soon as Bain completes the seventh trip.

There are several defensible locations, such as the vault after destroying its cameras, and either of the staircases that are accessible from the roof.

The achievement can be unlocked while also attempting to unlock the "I Pushed The Button and Lived!" achievement because the helicopter pilot can fly around while the big diamond's display case is being cut if all of the diamonds in the center of the vault are taken.

Kill all twelve patrol guards with trip mines only. You will have to have played the heist from the start.

Only one player per playthrough can unlock this achievement, and it must be done with one's own trip mines. If playing solo, then you must disable team AI, because bots will kill the guards.

The majority of the guards will congregate near the vault if you run through the lasers and then to the terrace without being seen. Instead of letting the guards trigger each mine, you should plant a mine next to a guard and then detonate it by shooting it.

It is advised that you reach Sharpshooter level 47 before attempting this, because there are more guards to kill than mines to deploy. At level 47, you are given 10 mines, which means you will need two double-kills or one triple-kill. Thick skin is also recommended because of self-damage from the mines.

Retrieved from "https://payday.fandom.com/wiki/Diamond_Heist/Walkthrough?oldid=129263"
Community content is available under CC-BY-SA unless otherwise noted.