In both games of the PAYDAY series, the drill is among the list of mandatory items whose usage is required in almost every map. Although initially slow and prone to jamming, the performance of drills can be enhanced with the proper skills.

Drills provide access to locked doors and safes, and are one of the most useful and widely-needed tools of the trade. By default drills break through very slowly and noisily, and are prone to jamming which makes even more noise than usual, though these can be remedied by having the right skills.

High-level players generally tend to forgo the drill completely, however, as certain high-tier skills provides access to faster and/or more efficient alternatives to drilling such as Shaped Charges, the use of the Saw and the ECM Jammer's Overdrive, though due to their usually limited amount of uses, and due to the fact that the first two are relatively noisy, the drill remains a viable option. There are also more spots to drill than there are places to put down Shaped Charges or use the Saw so drilling is almost always necessary.

Certain heists have their own unique drill that must be used as part of the mission objectives, such as the Golden Grin Casino and Big Bank.

"Why don't we just use a spoon?"
—Houston, contemplating on a new, probably more reliable tool for drilling.

The basic drill comprises of a dark blue common drill fastened to a mount and has an electronic screen that shows the drill's progress. Almost any heist has a drillable spot, ranging from door locks to deposit boxes, with most of them being early mission objectives and/or sub-objectives as in the case of safes.

Except very few instances, drills share a same mechanic for its possibility to "jam". Any drill placed is scripted to jam up to a maximum of 3 times, based on a random selection made at the instant the drill is placed. This holds true for both the common drills and the thermal drills in PAYDAY 2. Some heists feature drills that will not jam (as in the OVERDRILL and Counterfeit in PAYDAY: The Heist; The Big Bank and Golden Grin Casino of PAYDAY 2), though the drills featured can be disabled by other means. They are also much slower than the common drills.

In PAYDAY: The Heist the drill's position is highlighted with a yellow silhouette of the drill itself, while in PAYDAY 2 the crew must find a viable spot and then deploy the equipment.

In certain heists, most notably Bank Heists, a thermal drill is required to break through reinforced vault doors. These drills are either spawned on set or dropped in after a vault has been reached as in the case of the Train and Hotline Miami heists. As thermal drills can only be deployed from individual kits, usually only one unit can be up and running at once, though certain scenarios also allows the crew to purchase an additional drill bag so they can work on two vaults at the same time.

Thermal drills appear to be more visible and audibly noisier than basic drills, though these aspects do not affect gameplay any differently than regular drills do. They have a base drilling time of 360 seconds, and use the same jamming mechanics as normal drills. Due to the longer drilling time, they appear to jam less frequently, however do jam just as often as regular drills.

Thermal drills are affected by all the same skills as regular drills (see below):

Thermal drill bags are treated as loot by NPCs and as such guards will sound the alarm if they see one, though those that are spawned on set will not trigger be considered suspicious unless a player picks them up and drops them. Law enforcers will also attempt to take away thermal drill bags if left unattended.

"Industrialists calls this a heavy drilling aparatus, but heisters call it "The Beast". Gentlemen, start it up."
—The Beast's introduction.

The Beast Drill is a unique heavy duty drill in The Big Bank and San Martín Bank heists. This drill is required to break through the Bank's heavily reinforced vault door and has to be constructed by the crew on the spot via parts delivered by crane in the Big Bank or delivered by Bile by helicopter in the San Martín Bank.

The Beast Drill is also unique in that once it jams, the crew must fix it with spare parts included in the delivery, or pre-placed beforehand somewhere in the map in the Big Bank, or in a white van outside the bank in the San Martín Bank.

The Big Fucking Drill (or BFD, for short) is a drill designed by Russian heister Sokol and is unique to the Golden Grin Casino heist. The BFD is not technically a drill in the conventional sense (especially when compared to the kind usually used by the crew), but rather a plasma arc cutter on a rig that allows it to cut a circular hole. By default it takes 7 minutes (420 seconds) to make a complete cut, has two green water tanks, a breaker panel, a small cabinet (for supplies, initially empty), a ladder, and must be hooked up to the casino power grid via two cables to function. There are three ways for the BFD to shut down;

When the water tanks are empty, players can bag them and bring them to one of the downstairs bathrooms in the casino to be refilled via the sinks. Empty water tanks weigh roughly as much as a bag of money (but it is possible to sprint with them), and full water tanks weigh roughly as much as bagged weapons, such as those in Firestarter and Big Oil. Empty tanks take 30 seconds to refill, so they should be filled and replaced before the other tank runs out.

The behavior listed above is merely the standard, in Pre-Planning there are additional upgrades to the BFD which are separated into the BFD Upgrades and BFD Attachments categories. All upgrades to the drill are free in terms of cash, but extensive upgrades to it will significantly eat into the team's supply of favours.

Improved Cooling System and Additional Engine Power are very useful if the crew plans on going loud, reducing the cut time to 5 minutes and the number of total refills required to just one.

While the BFD upgrades themselves are useful, the attachments are less so;

The Big Fucking Drill's timer display when the Timer asset is bought. Seven minutes remain at the start of a cut without any speed upgrades. 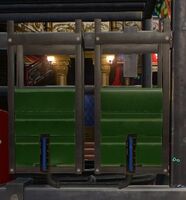 Mounted saws appear in PAYDAY: The Heist, and starting with Update #81, in PAYDAY 2 and, albeit different in appearance and purpose, function identically to the normal drill and are affected by the same skills.

They appear in PAYDAY: The Heist in Panic Room, Green Bridge, Undercover, and No Mercy, and appear in PAYDAY 2 in Aftershock, Goat Simulator Day 1, Alaskan Deal, Reservoir Dogs Heist Day 2, Brooklyn Bank, and the remastered versions of the aforementioned heists.

Saws technically were in PAYDAY 2 since release in the form of the OVE9000 saw, which is not mounted but is rather a primary/secondary weapon and used to open deposit boxes, doors, and ATMs, and in some cases, as a faster alternative to drilling.

In PAYDAY 2, these skills can optionally be acquired to further enhance the performance of drills in general. Players with more advanced skills can upgrade those set by others. Fixing an inferior drill automatically applies the upgrades.