"Time to cash out."
—Poster tagline

First World Bank is a heist from PAYDAY: The Heist introduced to PAYDAY 2 on day 6 of CrimeFest 2015. It takes place in a bank of the same name.

"Everyone likes to make a spectacular entrance and this is going to be one for the books. Two cans of thermite should be enough to make our own personal VIP entrance in to the First World Bank Vault. After that it's just getting out with the cash..."
—In-game description.

First World Bank requires the players to break into the vault of a large bank and steal four duffel-bags worth of cash. The heist begins with the players casing the bank to locate the manager and get a security keycard. Afterward, they will drill through a security gate and use thermite to burn a hole into the bank's vault. Once they have the money, the crew will use C4 to blow a hole in a wall and make their escape.

Before the heist begins, Bain informs the crew that their insider hid a drill and two cans of thermite in a photocopy machine in the server room, to help if the plan goes loud, leaving them to locate the bank manager in order to retrieve the gear.

The beginning task remains the same; find the manager and retrieve his keycard. The difficulty can vary, as he may be located in an isolated spot to the chance he is found on the lobby, pacing back and forth with his cell phone behind a wall where the bank tellers are located. Sometimes, he may spawn nearby a security camera, thus it may be required to either deploy an ECM jammer or eliminate the camera operator.

The next step is to disable the metal detectors. There are three electricity boxes that need to be rewired, all on the second floor; one inside the server room and two at various locations. It is strongly advised to locate and remember their positions in casing mode, as well as having team members stay unmasked to identify a passing guard when hacking an electricity box.

To enter the vault area stealthily,  the gate's security codes from one of the computers in an office area must be retrieved. It will always be on the opposite side of the vault entrance. If the camera operator is not dealt with, it may be advised to have the Nimble skill as often, a camera will overlook the computers. After finding the correct computer, the insider will then assist in unlocking the door by ordering the guards to leave. However, despite the insider informing players it is clear, there may be another lingering guard that will patrol around thus it is imperative to remain careful.

Empty the vault and drop the bags through the vent at the vault area's lobby. Get out by following the insider to the exit route, and get through the back office. A Titan Safe can be found in this area (on a conference table or on the floor, both near the garage exit) containing the item for the Au Ticket achievement. Finally, proceed down the stairwell, stash the loot, and escape. Be aware that there is a chance of police spawning in the passage to the garage, their gunfire will alert all civilians in the rear office.

Once the drill is attached to the security door leading to the back half of the bank, the crew will have to defend themselves while resetting the drill when it jams. Someone will also have to disable magnetic lock using a terminal in one of the offices upstairs in the upper management section of the bank. Snipers occasionally spawn outside the windows, including over skylights, so the crew must be aware when restarting the drill or traveling the front of the bank. After the drill finishes, the crew must make their way to a counting room above the vault and use the thermite to melt through the floor. Using both cans of thermite makes the process go more quickly (in Single Player, this means the player must make a return trip to the photocopy machine).

Once inside the vault, the crew must fill their duffel bags with the cash and wait for law enforcement to open the vault doors for their escape. While inside, there are also a number of loose bundles of cash both on the tables and in deposit boxes that can be taken for a small additional reward. After the doors open, an objective of throwing the bags down a vent will appear. Using this vent is strongly advised unless you are going for an achievement. When the crew is ready to leave, they must make their way back to the executive offices through the lobby (as security shutters will have blocked off the stairs next to the door they drilled), blow a hole into the neighboring building using C4, and navigate to the underground garage, where they escape via a garbage truck.

Please note they are only worth $1,000 (or $1,300 with Chameleon aced) and will hardly affect payout, they are only there as a nod to the first game.

Below is a list of all the possible locations where there may be money bundles:

Conducted early in the morning, this bank job carries all the hallmarks of a classic job by the Payday gang. Forcing their way through to the rear area, the gang used thermite to melt their way down to the vault interior. As police forces gathered outside the front, the gang used C4 explosives to blast through to the neighboring office, and made their escape before local commanders knew the heist was over. Inside help is suspected and we are currently investigating the backgrounds of the staff for likely collaborators.

My Notes: Why the hell weren’t we watching this one? Jesus Christ, one of the biggest banks in the DC area - of course they were going to hit it. And that escape….just shows how rigid the thinking of our commanders is. Might be time to clear the decks there. Bain really caught us with our pants down, and gave us a spanking we deserved for it.

"Machine, Mechano-man, Can-opener, Number 4. This Robot has had many names!"
—Trophy description. 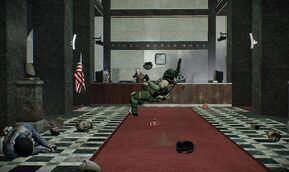 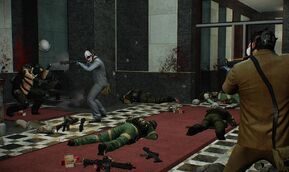 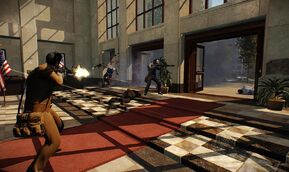 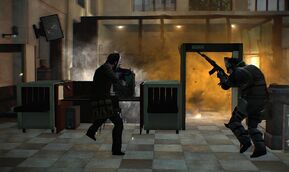 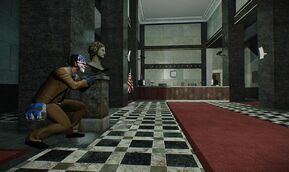 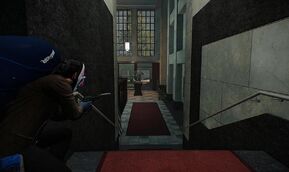 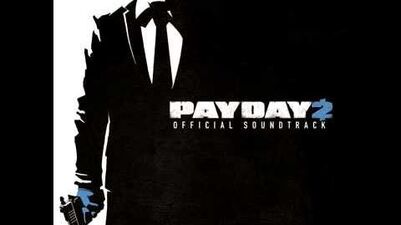