"Any career criminal worth his rap sheet will tell you that it is all about first impressions, and there's only one chance to make that first impression. You want everyone to take you seriously, and you want them to realize that you are one very crazy, very dangerous bank robber.

And there is nothing, I repeat, NOTHING, that says "I am serious" like a big shotgun in the hands of giant monkey.(sic) See for yourself."
—Announcement site quote. 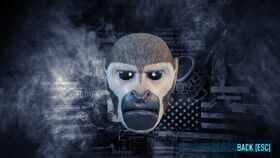 Clint the black-capped squirrel monkey. Not really a monkey without a name. Just like the real Clint, this monkey doesn't fuck around. It minds its own business. Doesn't talk unless talked to, knowing that the less it says the stronger it becomes. When it actually tries to say something it ends up screeching because it's a FUCKING MONKEY. 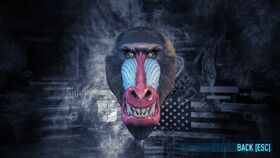 John the mandrill monkey. Mandrill's are closely related to baboons and even more to the drill. Not the kind of drill you use in a bank robbery, but the monkey drill, silly you! John is a monkey know for his sardonic one-liners, include the catch phrase "unidentified monkey screech". 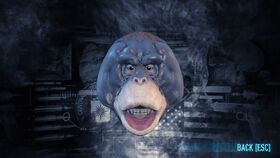 Rutger the motherfucking orangutan. If you're strolling down the jungle and suddenly face an orangutan, you're in trouble. Statistics show that one orangutan is as dangerous as ten hobos with shotguns. You remember that movie about dinosaurs with the big dinosaur in the end saving the kids? Know who killed the dinosaur after the credits? The kids did, but you know who killed the kids? Rutger the motherfucking orangutan did. 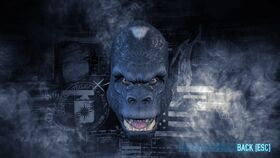 Steven the silverback gorilla. Not only is he fucking huge, he's strong as hell too. He can break your back by just looking at you. You'll be hospitalized for weeks. Not only that, but there'll be months of therapy as well. Do you know how hard it is learning to walk again? Want to know what else that is hard? Steven's muscles. 22 years ago he worked as a chef on a military ship. Killed everyone in 103 minutes. 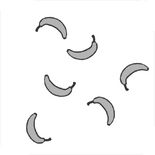 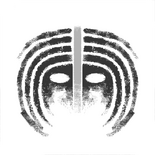 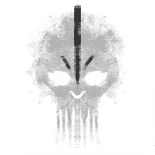 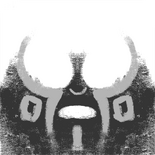 "Finally! I love this part of the reveal - the actual shotguns. The thing with shotguns is that they are so versatile: You can have power and performance, you can modify their size, there's all sorts of versatile ammunition (which we'll go into more later), and they're easy to operate and maintain. Let me show you what I've got for you."
—Announcement site quote.

"A melee is what happens when all else has gone to shit.

It's just you and the enemy in close combat, chaos all around you. You grab what you can and you throw it at each other, wrestling and yelling, throwing punches that hit empty air.

Knowing you, this is most likely how you use the fine knives that I've given to you in the past. Well no more. I'm going to give you something you can't miss with even if you tried."
—Announcement site quote.

K.L.A.S. Shovel
A weak and slow blunt weapon but has a very strong knockback capability

Survival Tomahawk
A general purpose tool, the Survival Axe is a fast and powerful survival weapon that can chop down even armored enemies

Aside from the default buckshot, each shotgun can now use one of four new ammunition types:

000 Buckshot
Reduced pellet count but increased damage. Slightly reduces maximum ammo. Available also to those who don't own the DLC.

HE Round
A hollowpoint, explosive-filled shell that stuns targets it doesn't kill. Reduces maximum ammo.

Flechette
A volley of armour-piercing flechettes that have greater range and accuracy, but deal less damage.

AP Slug
A large, solid, armour-piercing slug that can penetrate a Riot Shield. Accurate and powerful, but weight limits max ammo.
Of the new ammo types, users without the Shotgun Pack can use either the default ammo, or install 000 Buckshot on only two of their shotguns. Users who own the Shotgun Pack can install any of the four new ammo types on as many of their shotguns as they like, as many times as they want; the types are merely marked as 'AVAILABLE'.

Well, if they can do it so can we. I put word out on Crime.net and this is what came back. Here's some god damn achievements for you."
—Announcement site quote.