Start a Wiki
watch 01:31
The Loop (Games)
Do you like this video?
The Goat Simulator heist is a two day heist in PAYDAY 2 released on January 14, 2016, in the DLC of the same name, contracted by Vlad. It involves the crew chasing goats that have cocaine bags in their stomachs. It is the ninth contract given by Vlad.

Day 1 (This was not the deal)Edit

Day 1 involves the PAYDAY gang collecting scattered goats around the area of Downtown. With the assistance of a Longfellow, they must bring the goats to a truck and escape.

At the start players will spawn at a random spot of the map. A very large crowd of NPCs, ranging from civilians, gang members, and police officers, are seen to be distracted by the wreck, but eventually, all will get alerted and the heist will go loud. Players though, can briefly take advantage of this by quickly dominating the officers for hostages or to convert them.

Most of the goats will be out in the open, standing and laying in random spots, and some jumping on cars and even in a hot dog stand. However, there are some goats that will require the crew to do additional objectives to get:

After a while, Vlad sends in an escape truck that will take 2 minutes and will appear at a random location. It has two cages in which heisters must secure the goats in. After all the animals are stowed away, the Longfellow must be driven into the truck for the day to be completed.

A handful of ATMs are scattered around the area and it is recommended for at least one heister to bring the OVE9000 saw to open them and substantially increase the payout.

Day 2 begins with Vlad's driver preparing to extract the coke from the goats in a barn. However, it quickly becomes sour when the Honduran gang the coke was stolen from, tracks down the crew and a shootout ensues. This in turn brings the police in full force. Heisters only have a minute to eliminate the gangsters and board up the windows to prepare for the inevitable assault.

The gang is soon tasked with setting up a metal cage, like GO Bank, and haul the goats to the cage. The pilot will drop the cage parts at a random location, either the Silo, the bridge, or in front of the barn. On harder difficulties, a SWAT Van Turret will appear near the bridge to harass the crew. After the parts are placed, at least one goat must be thrown into the cage in order to deploy a balloon. The pilot will take 2 minutes to arrive but sometimes, he may miss and require additional time to catch the balloon.

After all the goats are flown away, players must evacuate with the Longfellow quickly. The journey to the escape point is far from quiet, as the police has set up barricades with more turrets in attempts to stop the crew. At one point, there is a chance a Black Bulldozer will launch fuel barrels and detonate them to damage the Longfellow. Eventually, they encounter a turned bridge with civilians present and are tasked in overriding the security measures. The door can be drilled, sawed open, or be destroyed with C4. On occassion, the control room may be flooded with tear gas to prevent players from taking cover within. The bridge will take 2 minutes to rotate and allow players to proceed to the escape point.

Our officers arriving at the scene were shocked by the chaos that met them. The Payday gang was in a full-blown shootout with the Honduran cartel, with several goats running amok all over the neighborhood. Upon examining one of those goats retrieved from the scene, we found a package of cocaine inserted rectally in the animal.

My Notes: These damned criminals are willing to do anything nowadays - smuggling coke using Goats? Anyhow, this is not like the Clowns. It was sloppy and poorly executed. Even though they got away with a big fortune, it doesn't fit their usual MO. Someone else was behind this. Someone with power and influence. The Russian guy we found hiding in a dumpster still hasn't given anything up yet, but we'll break him sooner or later.

"Ah that day with the goats...but whose idea was it to bring one back here? It's not even housetrained."
—Trophy description 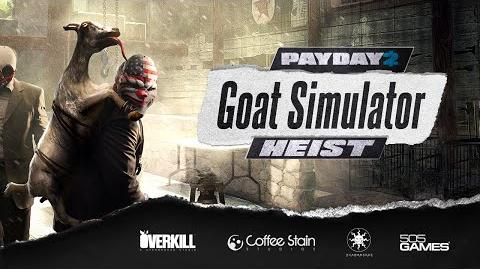 PAYDAY 2 The Goat Simulator Heist Trailer
Add a photo to this gallery
Retrieved from "https://payday.fandom.com/wiki/Goat_Simulator?oldid=179814"
Community content is available under CC-BY-SA unless otherwise noted.