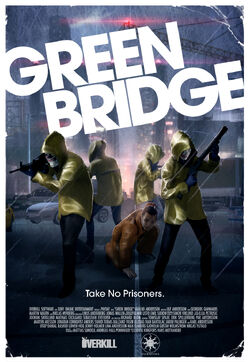 Green Bridge is a heist in PAYDAY: The Heist. The intent of the heist is to free the son of a wealthy Chinese businessman from a prisoner transport. The crew must escort the Chinese prisoner past law enforcement for a daring skyward extraction, executed by George the airplane pilot, via skyhook. After which the crew must escape themselves by fighting their way to a set of pre-planted diving gear.

"Some very polite eastern friends have asked us to extract the son of a local businessman from a prison transport. The plan is simple: Under cover of darkness, we hit the convoy when they cross the green bridge. We stop all traffic, then grab our man. We put him in a fulton skyhook and make him vanish into thin air..."
—In-game description.

The heist starts with one of the crew activating an explosive that is intended to stop the movement of a prison caravan transporting prisoners. The explosion detonates a passing tanker, which in turn blows the bridge in two, sending one of the prison transports teetering near the edge. Once the prison guards and police have been dealt with, the crew must attach saws onto the four doors of the vehicles. The crew must defend themselves from waves of police attacking from the far end of the bridge and helicopter insertions. The saws will finish independently depending on when they were installed. The VIP is randomly sitting on one of the vehicles, and is the only visibly Chinese prisoner.

The crew must escort the VIP across the bridge to the top of some scaffolding, and attach him to a Fulton balloon system. George the plane pilot then arrives and picks him up, though it is possible for him to miss the first time and the balloon system would need to be reset.

Once the VIP is secured, the crew must make their way down the scaffolding to the far end of the bridge, through the one final wave of police, to a set of diving gear which they will use to make their escape. 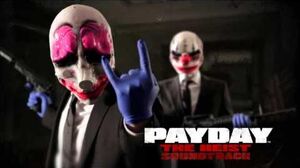