Green Bridge is a remastered heist from PAYDAY: The Heist introduced to PAYDAY 2 on Day 10 of The Search for Kento event. The intent of the heist is to free Kazuo from a prisoner transport, who has information on Jiro's son Kento. The crew must escort Kazuo past law enforcement for a daring skyward extraction, executed by George the airplane pilot, via skyhook. Afterwards, the crew must escape themselves by fighting their way to a set of pre-planted diving gear.

The heist starts with one of the crew activating an explosive that is intended to stop the movement of a prison caravan transporting prisoners. The explosion detonates a passing tanker, which in turn blows the bridge in two, sending one of the prison transports teetering near the edge. Once the prison guards and police have been dealt with, the crew must attach saws onto the four doors of the vehicles. The crew must defend themselves from waves of police attacking from the far end of the bridge and helicopter insertions. The saws will finish independently depending on when they were installed. Kazuo is randomly sitting on one of the vehicles, and is the only visibly Japanese prisoner.

Along the way, there is a GenSec armored truck, similar to those in the Transport heists. The loot from it can be secured in a yellow chute on the scaffolding where the prisoner is secured.

The crew must escort Kazuo across the bridge to the top of some scaffolding, and attach him to a Fulton balloon system. George the plane pilot then arrives and picks him up, though it is possible for him to miss the first time and the balloon system would need to be reset.

Once Kazuo is secured, the crew must make their way down the scaffolding to the far end of the bridge, through the one final wave of police, to a set of diving gear which they will use to make their escape.

After Bain has set off the explosives, the crew must spring into action and sprint towards the prison transport convoy ahead of them. Scattered civilians will flee and the armed guards from the four trucks will attempt to stop the crew. Once after they are dealt with, saws must be placed on all of them since it cannot be certain where Kazuo's exact position is located.

By now, the police force will already have been deployed all around the bridge, commencing the first assault wave. It is advised to keep them at bay and ensure the saws are fixed when they are jammed. Be sure players can fend enemies off otherwise, they may bunch up together and overwhelm team members. From the beginning to the end of the heist, helicopters will deploy snipers and take advantage of the open area thus making them great threats.

Bain will notify players if a saw is done, and the doors to the truck must be manually opened. If lucky, Kazuo may be spotted in the first opened truck. Otherwise, it may even be required to saw the rest of the vehicles. When he is located, players have to shout at him and eliminate any police operators nearby otherwise, Kazuo will stop and not move. He must be closely guarded and shouted at again to keep moving to the tower that players had originally started near. The task will be much easier if hostages are secured and the assault wave has ended.

A Gensec truck can be drilled opened and if players have the luxury to open the deposit boxes, they can secure the loot by throwing it into a yellow waste chute in the same tower Kazuo must be escorted to. The loot is always 4 bags of money (currently bugged, see #Bugs).

After securing the extraction point of hostiles, players have to deploy a balloon at the top of the tower to allow George the pilot to identify his target. Bain may warn players an attack helicopter has been summoned, in which it has a turret attached underneath. It is capable of hovering around the rooftop, forcing the crew to either seek cover within the tower or destroy it if heavier ordinance is available. Unlike the original, Kazuo still requires protection, as law enforcers can drag down the balloon, delaying George's arrival until it is redeployed. He may miss the first time, thus tasking players to send it higher, but will always succeed in extracting Kazuo to safety the 2nd attempt.

When George declares he has done his part, a never ending assault wave will commence and escape is available. However, the police has set up a blockade with their SWAT vans, in which one of them must be sawed open while another may contain a Bulldozer which will hop out to attack players.

After the van has moved away, players must sprint to the escape zone while fighting additional enemies, and possibly under fire from the helicopter turret and snipers. The crew must sprint to a specific pillar while avoiding enemies and head down the stairwell to conclude the mission.

Differences from PAYDAY: The HeistEdit

The Green Bridge blown to bits and several prison transports sawed open. It seems to have been the Payday Gang again. There were a number of prisoners missing, but it's hard to say who they were after - none of the missing had any obvious connection to the gang or any of their known associates.

My Notes: Blowing up a major bridge just to break someone out. These guys are going far beyond anything ever heard of in US crime history. We must stop them, and soon!

"The cops aren't issued cable ties so they're forced to use these strange contraptions instead. You picked these ones up on Green Bridge."
—Trophy description

UNLOCK CONDITION:
Find at least four out of the six pairs of handcuffs in the Green Bridge heist. 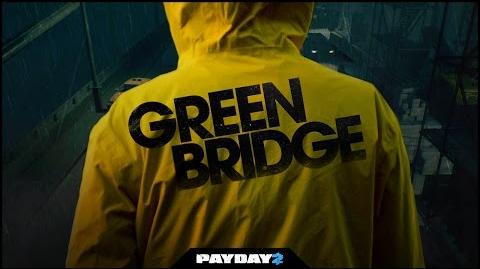 PAYDAY 2 Green Bridge Trailer
Add a photo to this gallery
Retrieved from "https://payday.fandom.com/wiki/Green_Bridge_(Payday_2)?oldid=183904"
Community content is available under CC-BY-SA unless otherwise noted.