The h3h3 Character Pack is a DLC pack for PAYDAY 2, created as part of a collaboration between Overkill Software and h3h3Productions and features the hosts of the latter podcast as playable heisters.

In an unusual break from tradition, the profits from the sales of the DLC are not owned by Overkill, but instead are donated directly to the Kleins to aid them financially in their legal battles to preserve their rights of free speech.[1]

Being the last purchasable content expansion available, it was released on November 22, 2017 for $4.99 USD.

Once you have bought the DLC, you will unlock 1 copy of each mask in your inventory. They cannot drop during paydays, they can be returned to your mask stash for free, but any pattern, color or material as well as the customization fee to put these together will be lost. 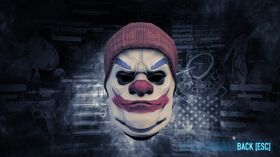 This mask exudes power and brute force, in stark contrast to the man who wears it. Equal parts clown-like sadness and begrudging anger, it perfectly captures the mood of someone who has somewhat reluctantly chosen to be a heister. 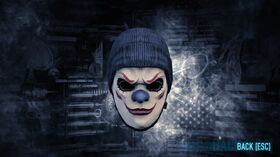 Something about this mask radiates a playful malice and most who gaze upon it immediately feel a sense of unease, which is just the kind of thing you need when you're robbing a bank. 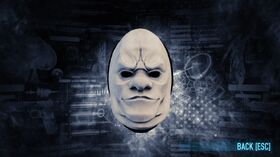 This is a clean version of Ethan's iconic mask, before it was painted. 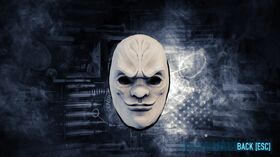 This is a clean version of Hila's iconic mask, before it was painted.

Some way that experiences are best when shared, even in the case of performance-enhancing aerosol dispencers(sic)! For that special heister you like, this is something to bond over while you're looting bank vaults and taking care of business.

Retrieved from "https://payday.fandom.com/wiki/H3h3_Character_Pack?oldid=183769"
Community content is available under CC-BY-SA unless otherwise noted.