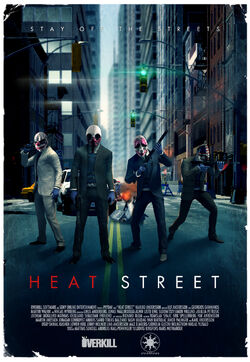 "Stay off the streets"
—Poster tagline

Heat Street is a heist where you are double-crossed by an accomplice and must make it through the police to apprehend him.

"Someone once said there is no such thing as a sure thing, but this job looks easy: get in, get the briefcase, get out. Your trusted wheelman Matt will be waiting for you in the alley and as long as you get to the van there is no way you can fail. Is there?"
—In-game description.

The heist's description in the level select and loading screen explains that the crew is hired to obtain a package containing valuable plates, and they are escaping via their trusted getaway driver Matt.

When the heist begins, Matt betrays the crew by firing a shot at one of the crew members and locking them inside the building. The players must chase him through the streets, following him while fighting against the police. When the players find Matt, his vehicle is found crashed, though he has locked himself in the back. To remove him, the players must hold out against waves of police forces while using found gas canisters to set the vehicle on fire.

When Matt finally exits the vehicle, the crew is disappointed to find the case handcuffed to his arm, and with too much enemy fire on them, they are forced to accompany him to their tertiary getaway, a helicopter.

The crew accompanies Matt across the highway and has one final fire fight with the police, protecting the helicopter while they board it. The heist ends with one of the crew members telling Matt that he hopes the handcuffs come off or they will remove his entire arm. Matt's exact fate is unknown, although the Merry Payday Christmas album suggests he was thrown into jail and was later joined by "Old" Hoxton in the same cell block.

A SWAT van parked behind Hoxton. 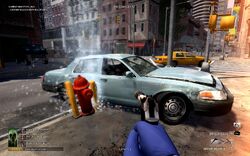 One of the many promotional posters found in the map. 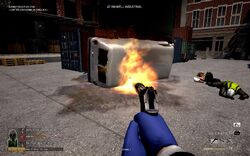 The "Overkill" Easter Egg on the roof of an apartment building.

The crew escorting Matt to the extraction point.