The IZHMA 12G shotgun is a primary weapon available in PAYDAY 2.

The IZHMA 12G is a low damage shotgun that, unlike most other shotguns in the game, is magazine fed. This allows it to have a consistent and fast reload no matter how many shots have been fired. Another defining feature is its fully automatic fire compared to the pump-action Reinfeld 880 and Locomotive 12G. This gives it impressive damage per second when used at close range and allows one to kill entire groups of enemies in the right circumstances.

The damage is high enough that head shots can kill standard law enforcement in one shell, even the heavily armored FBI agents. Another advantage is that it tends to receive 4 or 5 shells from the ammo drops of dead enemies (without skills or perk decks to improve this), compared to 1 that the Reinfeld 880 and Locomotive 12G. With this advantage, plus its very high maximum ammo relative to its power, ammo tends to be much less of a concern over a long duration.

Unfortunately, it suffers greatly from both poor accuracy and sharp damage drop off, like other shotguns. This is not a severe detriment, however, as only a single pellet is needed to deal full damage and follow-up shots are not difficult.

With the addition of the Gage Spec Ops DLC, the IZHMA can be modified for a respectable Concealment of 26, making it very viable for low-detection builds utlizing Low Blow and/or Sneaky Bastard. The weapon's automatic, low-damage nature means that it benefits exceptionally well from critical hits, converting the IZHMA into a powerhouse that can hold its ground even on higher difficulties. This also makes it accessible to Sneaky Bastard Dodge builds seeking close-quarters stopping power.

Since the IZHMA shares the AK form factor, it has access to a large variety of mods that can massively improve its mediocre stability. When configured for high concealment, however, recoil will still be an issue.

When doing the Death Wish Difficulty, the IZHMA will seem to underperform most of the time. Since it may take 2 or 3 shells to get the first kill to start the Overkill skill, the player must be exposed to fire for some time. In the right circumstances, if Overkill can be activated, it returns to the expected performance of lower difficulties, one shot killing most all but the tougher specials. Players that have a lot of experience with the IZHMA can still find it useful and may prefer it in a good team to help round out the loadout.

There are several secondary weapons that work well with the IZHMA 12G. A secondary shotgun such as The Judge loaded with heavy explosive rounds can easily deal with Shields, Bulldozer faceplates, and SWAT Turret armor. A high damage, high-accuracy pistol such the Parabellum is another great complement, capable of killing long-range targets and dishing out massive amounts of damage-per-second in close quarters, especially if using Low Blow or Overkill aced.

For a comparison between sight looks ingame, check here.

A preview of the IZHMA 12G.

Photo of the old inventory icon, note the Skeletal Stock.

The now deceased snitch with the IZHMA 12G behind him.

The IZHMA 12G with a scope mount on without an optic sight. 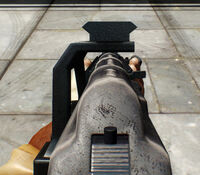 Aim with the sights with only the scope mount equipped.

A Black Bulldozer with his IZHMA 12G Shotgun
Add a photo to this gallery
Retrieved from "https://payday.fandom.com/wiki/IZHMA_12G?oldid=180309"
Community content is available under CC-BY-SA unless otherwise noted.