Jimmy's signature weapons are the Specialist Knives and the Heather submachine gun, available in both single and akimbo variants. His perk deck is the Maniac.

A morally bankrupt scientist who worked under Akan to develop cyborg super-soldiers for his corporation. Jimmy lost it all when his experiments with super-soldiers failed to yield results and Akan had him rendered quadriplegic as punishment. Taking his valuable research he has bred cyborg clones to indulge in a variety of vices with several avatars ranging from a suited superspy to his favorite avatar, the coke addled maniac with an insatiable sex drive. Sometime before Akan has finished working on Henry, Jimmy joined the Payday gang to fund his research and indulge in his vices.

As a contractor, Jimmy actively implores his newfound allies to help him take down Akan, or at least try to cause as much damage as possible by hitting the crime lord's research station and destroying all progress made. 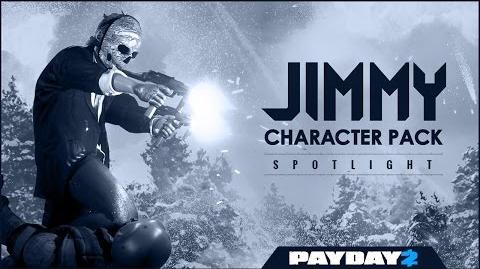 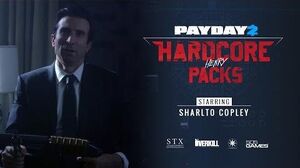 Artwork of Jimmy for the Most Wanted DLC bundle for Crimewave Edition, along with Rust and Sydney.
Community content is available under CC-BY-SA unless otherwise noted.
Advertisement