The Jimmy Character Pack is a DLC pack for PAYDAY 2, released on March 25, 2016 as a promotional character to celebrate the release of the movie, Hardcore Henry. A companion heists DLC was released on March 31.

You will unlock 1 of the "Jimmy" mask in your inventory, but will have to get "The White Death" from a Card Drop. The "Jimmy" mask can't drop during a payday and they can't be sold. They can both be returned to your mask stash for free, but any pattern, color or material as well as the customization fee to put these together will be lost. 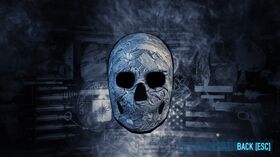 Jimmy hasn't really made many masks before he made his signature mask - and it shows. His mask design captures his free spirit and his disregard to things as appearance, planning and such. Good is good enough for Jimmy, he doesn't get stuck in ideas and wants to move forward at all times.
THIS IS AN INFAMOUS ITEM! 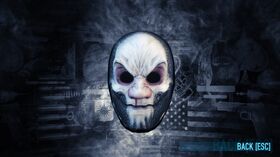 Jimmys second attempt at making a mask went much better - that's because he got some help from Gage. It represents the Grim Reaper himself if he was coked up. The mask captures both the crazy and deadly sides of Jimmy, aimed to sending fear into his enemies.
THIS IS AN INFAMOUS ITEM!

The Maniac Perk Deck is the embodiment of crazy and to never accept bad odds in moments of danger. By pushing through and constantly deal damage, your fellow heisters will be granted a temporary shield making all of you feel Jimmy's invulnerable spirit.

Retrieved from "https://payday.fandom.com/wiki/Jimmy_Character_Pack?oldid=166968"
Community content is available under CC-BY-SA unless otherwise noted.