"ははっ、横綱かと思った。 お前のお袋さんだったとはな！ (Haha, I thought I saw a pro sumo wrestler. Didn't realise it was your mother!)"
—Jiro leaving a pager response

Jiro (じろう Jirou) is a Japanese Yakuza member and the twelfth character available in PAYDAY 2. He is the fourth paid heister, released after Clover, Sokol, and Dragan in his own character pack.

Jiro was born in Japan during the 1960s to a Japanese seamstress and a U.S. Navy Lieutenant stationed in Sasebo. Life was hard, as shortly after his father's fleet was removed from Japanese waters, his mother left him as well. Abandoned and left to his own devices, the resourceful Jiro knew there was only one "family" for him, the Bōsōzoku.

After years of crime and violence, Jiro caught the interest of the Yakuza clan ruling Osaka and purportedly became one of their most outstanding members, following the oyabun's orders to the letter. All except for one.

He had a brief but secret romantic affair with the oyabun's daughter, Yoshimi, who bore him a son, whom he named Kento. Despite Jiro's best efforts to keep their relationship undiscovered, his clan eventually found out, and on one night raided his home, killing his lover and escaping with his child. Betrayed and left for dead, Jiro himself was arrested and put behind bars for twenty years.

As he finished his sentence, Jiro sought to reclaim honor for his late wife and find his lost son. As he killed his former brothers one after one, he finally found a way to track down what he was looking for, and the one man who could help him - Bain.

The Search for Kento[]

After a period of searching, Jiro and Bain finally found a lead to Kento's whereabouts in 2017. The story of the investigation unfolded during the ten days of the Spring Break 2017 event. Within that time span, the PAYDAY crew apprehends a former accomplice turned traitor who claims to have information on Kento and they rescue an ex-Yakuza member named Kazuo on Green Bridge.  However, with Bain captured, the search for Kento had reached a standstill for a time.

In Henry's Rock, a mysterious mercenary shows himself and quietly observes the PAYDAY gang as they near their escape of the Murkywater facility. A hidden dog-tag in his model reveals the name "Kento" and in the Safe House, Jiro no longer speaks since the heist, suggesting he became distraught upon seeing his son working for an enemy organization.

In Hell's Island, Kento is mentioned to be present in the Murkywater prison that is holding Bain. After Bain is freed by the crew, he proceeds to unleash a rampage that claims the lives of many of the PMCs. When the crew catches up to him on the roof, it is shown he is holding Kento's corpse before fainting.

Currently, it remains unknown why Kento has joined Murkywater and if he had knowledge of his father being a member of the PAYDAY gang. However, this may had something to do with The Dentist as he mentions Jiro's son before Kento's demise from the hands of Bain.

A voice line from Dallas, released following the Breaking News event, states that while Jiro has difficulty with the situation, he accepts Bain's reasons for killing Kento and holds his grudges against The Dentist and his former Yakuza clan members, feeling that he truly lost his son long before his ties with Murkywater. 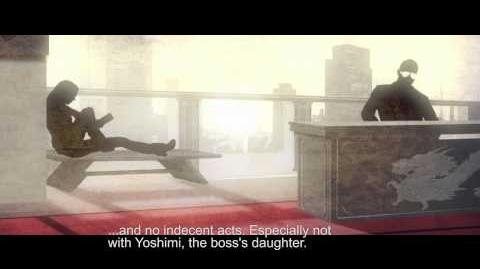 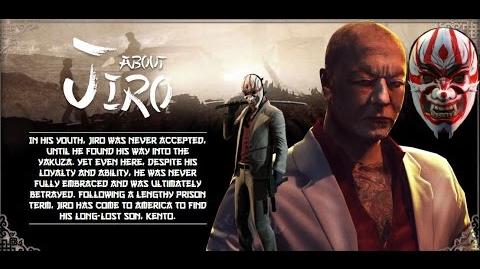 Jiro with the Payday gang.

Jiro without his mask.