Joy is a Japanese Hacker and the twenty-second playable character released for PAYDAY 2.

Previously exclusive to the Nintendo Switch release of PAYDAY 2, Joy was released as a free character to the PC editions of the game as part of operation ICEBREAKER on August 13th, 2018.

Joy's been a cyber criminal since her younger teens. She's a skilled hacker, when it comes to tech and computers. But she also knows how to handle a gun and she's as tough as they come in spite of her young age. As protegé of the shrewd Vernon Locke, Joy joins the ranks of the Payday gang with her cyber-security expertise on offer. With the mounting threat of the enigmatic Kataru, it will be increasingly important to protect Crime.net from interlopers. This is where Joy will show her worth as a member of the crew. 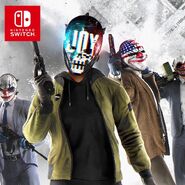