The KSP light machine gun is a primary weapon available in PAYDAY 2. It is available to players at reputation 45 that have bought the Gage Weapon Pack #02 DLC.

The KSP is one of the 6 LMGs currently available for the crew and was added with the second Gage Weapon Pack. It is the second LMG available through leveling, having a reputation lock of 45.

Even when aimed in, the KSP (as with all LMGs) does not use sights, so a laser module is recommended for accurate aim.

The KSP is the LMG that is the most appropriate for close quarter combat, having a very high rate of fire and high damage, alongside an enormous capacity of 200 rounds and a total ammo of 400 (500 with Fully Loaded). The weapon can be fired for several seconds before having to reload. As a result a single person can cover a whole room without much difficulty. At the end of a wave one can collect most if not all of their ammo back, as the weapon collects a large amount of ammunition back from pickups. This extreme room clearing power can be boosted even more with the Technician skill tree, as it offers more hip fire accuracy and damage. In an extreme situation one can deploy an ammo bag with the Bullet Storm skill to get up to 15 seconds of continuous fire with no ammo loss. With the weapon's quick fire-rate, these 15 seconds can be used to deal massive damage.

The weapon does however have a very large drawback, namely its fairly low accuracy. It also has a fair amount of recoil and which while controllable, can quite easily make you miss your targets. As a result a player without Technician skills and modifications should fill the role of a shotgunner, protecting smaller rooms using cover to get closer to enemies and flank them.

A preview of the KSP without its bipod.

A preview of the KSP. 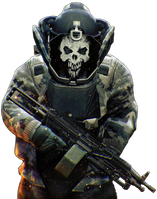 A Skulldozer wielding the KSP.

The KSP in the hands of the Commissar.

Chains wielding the KSP during the Death Wish trailer.

A close up on the KSP, note the small sling with a smiley face attached to the buttstock.
Русский
Community content is available under CC-BY-SA unless otherwise noted.
Advertisement