Loot is the main source of income for the crew in PAYDAY 2. It is what the PAYDAY gang steals and what shall make them rich in the end. Loot exists in two main types: Bag Loot and Loose Items.

Bag Loot is loot that can be interacted with to pack it up into a loot bag, which can then be picked up and carried to the getaway vehicle, extraction point or escape zone, to be cashed in after the successful end of the heist.

Loose Items comprises loot that can be picked up instantly, without the need to separately pack it up and carry it. It is also cashed in after the successful end of the heist.

In order to successfully steal and secure money and valuables, they must be packed up into bags for easier transport. This is done by interacting with the loot item, which converts it into a loot bag which can be picked up and carried by the heister and dropped when needed. Whenever a player is carrying a loot bag, their screen will be slightly tilted to the left and an on-screen label will appear, reading "CARRYING:" along with the name of the loot item being carried.

There are various types of loot bags, all of which fall into one of six weight categories which affect the carrier's movement speed, jump height, ability to sprint as well as how far the bag can be thrown. Generally speaking, the heavier the bag, the more it slows down the carrier and reduced their jump height, and the harder it is to throw. All bags heavier than Light will also prevent the carrier from sprinting. Skills and perks can reduce some of these negative effects.

Internally in the game's files, there are actually 10 different categories of bags listed. Aside from the standard six types of bag which are differentiated by the above weight categories, there are also four technical bags classed as, "coke_light", "explosives", "cloaker_explosives", and "being". However, these bag types are ultimately inconsequential, as they are stat-wise merely copies of light, medium, medium, and heavy bags respectively. Exceptions are explosives which, unsurprisingly, gain the additional property of exploding if thrown or dropped a great distance. Shells used to have this bag class until Update #57 changed it to medium, making them harmless and the explosives category unused and "cloaker_explosive" which makes bags vanish on Prison Nightmare and Cursed Kill Room when the timer expires. Bags of coke and meth are technically classed as "coke_light". Body bags are technically classed as "being".

In order to turn in a loot bag and thus cash it in after successfully completing the heist, it must be either thrown into a designated extraction point (e.g. van, helicopter, boat) which is usually adjacent to or synonyous with the escape zone or it must be carried by the player as they escape through said escape zone. The extraction point is marked with a suitcase icon

and is surrounded by a black-and-white-striped outline, and is usually also either an escape vehicle or a place where the loot can be stashed for easier retrieval later (such as vents or dumpsters in stealth heists and ziplines that transport the loot to a safe place). Any loot bags that are thrown into this extraction point will immidietly be secured, which is signified by an on-screen pop-up that reads "SECURED" and lists the name and monetary value of the loot. After this, the loot bag cannot be interacted with again by either heisters or police, and it will be cashed out when heist is successfully completed. Extraction points are not always synonymous with escape zones, however, as sometimes the escape zone does not allow for loot bags to be secured and if a loot bag is just thrown into an escape zone that is not an extraction point (a getaway vehicle or a loot stash) and is not retrieved before the crew escapes, then it will not be secured and will not count towards their payday. In order to secure loot bags in such situations, the heisters must pick up the loot bags and carry them on their person as they escape through the escape zone.

Multiple-day heists have mechanics for transferring the bag-value of all secured loot from one day to the next, until they are all cashed out after successfully completing the final day. They differ per heist however. Here you can see how the final tally will be made for these jobs;

Note: Money gained per bag onscreen and actual value given does not match during Rats Day 2.

In nearly every heist, there is the opportunity to earn money by stealing large amounts of valuables. In some heists, the crew is required to steal a certain number of loot bags and extra bags can be stolen for significantly more money. Additionally, a certain selection of heists even allow the crew to continuously manufacture more loot on-site using various methods, allowing them to generate and secure as much loot as they desire and can. The value of a loot bag depends on the difficulty level and whether or not it is an objective requirement. The values are calculated as follows:

These pickups always give money. The aced Chameleon skill provides a 30% increase to their value.

In general loose loot value scales with difficulty level as follows. The notable exceptions to this are the basic money bundle, the poker chips in Golden Grin Casino, and the phones and tablets in Stealing Xmas, which always retain a fixed flat base value of $1,000 regardless of difficulty level. Also the ??? loose items in Birth of Sky have a fixed base value of $1,954 on all difficulties.

Vehicles are a special kind of loot, and are currently only considered as loot in the Car Shop heist (Goat Simulator, Aftershock, and The Biker Heist also require vehicles to be taken to certain areas but they are not secured as loot and no money is gained). They require you to drive them to their drop-off point to get your monetary reward. One player can drive one vehicle, but it is possible to take advantage of map geometry to stack two cars on top of one another, allowing a solo heister to secure up to two vehicles at once.[1]

In some heists, there are certain kinds of bags that, while behavior-wise identical to normal loot bags and likewise crucial or otherwise are beneficial to the mission progress, cannot be secured for a monetary value. Instead, they are usually items that allow the heisters to gain access to actual loot or otherwise aid the heisters. The basic rules of regular loot bags still apply.

Junk are items of no monetary value that have a chance to appear in deposit boxes and safes. They cannot be interacted with at all. 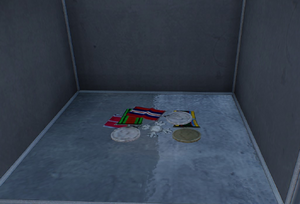 A collection of wartime medals. 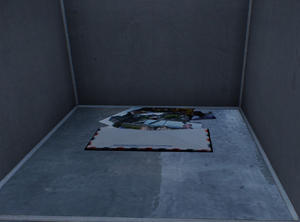 A collection of photos.

A book about the history of Rome. 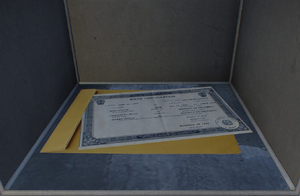 "You really wanted this armor, more than anything else."
—Trophy description

UNLOCK CONDITION:
In the Shadow Raid heist, steal all the Samurai Armor before grabbing or securing any other loot, playing on OVERKILL difficulty or above.

But It's The Tooth!

UNLOCK CONDITION:
Find the toothbrush in the Panic Room heist.

"You had to swat some wheels to get this beauty."
—Trophy description

UNLOCK CONDITION:
Finish the Diamond Store heist with all bags and destroying the SWAT Turret, on OVERKILL difficulty or above.

"Ah that day with the goats...but whose idea was it to bring one back here? It's not even housetrained."
—Trophy description

"Yes, you took it. But do you really really need it?"
—Trophy description

UNLOCK CONDITION:
Find the hobo's knife in the Aftershock heist.

"For dummies and others who want to get into the meth cooking business."
—Trophy description

UNLOCK CONDITION:
Finish the Cook Off heist with 25 bags of meth on OVERKILL difficulty or above.

"You don't have to be the fastest runner to win the race. Not if you're willing to shoot the other guy in the kneecaps."
—Trophy description

"With every bullet we shoot, we should remember there is only one, true Bullet."
—Trophy description.

"The Cultist declared himself the hero only to realize that his actions could very well have made him the villain."
—Trophy description.

"Who are these people anyway?"
—Trophy description.

UNLOCK CONDITION:
On Day 3 of the Firestarter job, find the rare poster of the OVERKILL hockey team.

"In honor of the one that survived the Interdimensional Horror!"
—Trophy description.

"Nine for mortal men. And a tenth for the mad heister that doomed them to die."
—Trophy description.

UNLOCK CONDITION:
In the Birth of Sky heist, find all 9 rings.

"Machine, Mechano-man, Can-opener, Number 4. This Robot has had many names!"
—Trophy description.

The World Is Yours

"The world, chico, and everything in it."
—Trophy description.

"The cops aren't issued cable ties so they're forced to use these strange contraptions instead. You picked these ones up on Green(sic)"
—Trophy description

UNLOCK CONDITION:
Find at least four out of the six pairs of handcuffs in the Green Bridge heist.

"You stole this from a train. It wasn't easy, but damn it looks good here."
—Trophy description.

UNLOCK CONDITION:
Finish the Armored Transport: Train heist with all bags, on OVERKILL difficulty or above.