The Medic is a special unit added on Day 6 of Hoxton's Housewarming Party as one of the new game changers. His healing ability instantly restores the health of any law enforcer he is close to, allowing them to survive even otherwise fatal shots. The Medic spawns only on difficulties from Overkill and above.

"These armed combat Medics are sent into dangerous situations in order to increase the survivability of other officers in the operation. They are very effective in combination with other, heavier units. But precisely because of this, they are unfortunately often targeted first by any heavily-armed criminals looking to take on a police SWAT team.
My Notes: Finally. These guys might be just what we needed to tilt the balance. The casualty rates have been far too high, and it’s a long game. Losing fewer officers in combat might mean we’ll ultimately have the manpower to last the whole distance in this war on crime."
—FBI Files Description

Medics wear red and white gear with a green balaclava, making them easy to distinguish, and can be armed with assault rifles and shotguns. Despite being just as well-armed as other enforcers, their purpose in combat is not offensive. As healers, they provide medical support for other on-site law enforcers and prolong their life expectancy when engaged in firefights with the player crew. As with most special units, the Medic speaks in a radio-distorted voice, though to a much lesser degree.

Medics are actually easier to spot on higher difficulties, especially on Death Sentence due to their distinctive outfit.

Despite having the same high durability as Tasers, Medics are much weaker in combat due to them lacking the former's direct offensive capabilities. Because of this, the Medic AI is scripted to improve its own survivability in combat by forcing the unit to stick with their comrades as appropriate for their role. Medics tend to hide behind other advancing units which serve as their meatshield that soaks up the incoming damage from the players, while they themselves will heal any damage the crew may have inflicted upon the frontliners.

Medics behave much like a regular law enforcer, usually firing upon the heister while moving to cover if he has a line of sight to them. If a Medic spots an injured law enforcer within 7 meters from him (including through obstacles such as walls and floors), he will stand still and wave his left arm in the air similarly to the heisters' Inspire Aced gesture, projecting an invisible "beam" to said the unit that heals them. A law enforcer being healed will sport a bright green outline. Their AI script will also prioritize Special units over the rank-and-file. Medics have a cooldown in between heals and cannot self-heal, though two Medics can take turns healing each other.

Although Medics are designed to heal law enforcers, they may attempt other tasks to hinder the PAYDAY crew such as interfering with hacking efforts.

The Medic should be treated as a priority target if one is spotted in the field. The exclusion to this rule being Crime Spree, where killing a medic may buff enemies around them, so be aware. Being capable of refreshing any of their injured allies, the Medic can prove rather problematic if paired with Bulldozers or Tasers, which is further made worse by their tendency to hang behind said units during a shootout, making them much harder to hit. If not targeted, they can help reduce a fair amount of damage the crew inflicts and prolong the fight. Even worse, the biggest threat of the Medic is that he can heal the Shield units of Captain Winters' detail while hiding behind them, prolonging the assault wave further and making them more resistant to damage. Medics are also capable of healing snipers as well, although this can only be observed in heists where enemies share their spawn points with snipers, such as Panic Room.

Medics tend to stay in or behind groups of enemies for cover and generally do not pursue heisters, often preventing an opportunity to eliminate them. As such, other enemies can rush into areas where players are taking cover and can be healed if damaged.

Additionally, while they cannot self-heal, multiple Medics can take turns healing each other. Although not tactically dangerous per se since neither Medic can move nor attack during the heal, it can prove frustrating when trying to clear them from certain objectives with a low damaging weapon.

The Medic's key weakness is while healing a law enforcer, he cannot move nor attack for the duration and must rely on the assistance of nearby units. The unit being healed by the Medic is also affected the same way and will cease fire on a target. It is imperative to either quickly kills enemies near the Medic or try to separate them. Even dominating common units that were healed by the Medic can be a viable strategy against them.

The Molotov Cocktail and Incendiary Grenades are excellent to use, as they can cover a wide area and constantly damage units caught in the blaze. Medics will not be able to counter the constant damage as easily and they will prioritize healing them which prevents said units from escaping the fire. This can work even when two Medics are near each other since they cannot heal each other at the same time. As a result, players can use less ammo to kill burning law enforcement, if given the right circumstances.

If said weapons and a steady incendiary arsenal are not available, utilizing explosive weaponry, like an HE-loaded shotgun, can damage and potentially stun common units and most special enemies, thus making it harder for Medics to heal them all quickly. This creates an open window to quickly kill them.

Another option could be to take them out from afar with a sniper rifle, where you won't have to be close to so many cops getting healed. But due to the fact he tends to hide behind other officers, landing shots on him might be more difficult as he isn't on the front lines like other Specials such as the Bulldozer.

Finally, the Buzzer, the Electrical Brass Knuckles, and a thrown Concussion Grenade can stun a Medic as a last resort, preventing him from healing a targeted unit and allowing a chance to eliminate the Medic. Poison from the Kunai Knife and thrown Shuriken is not as effective, as the Medic will not be stunned as long as most other units.

"A first aid locker. Because we care about the medical profession."
—Trophy description

UNLOCK CONDITION:
Complete Beneath the Mountain heist on Mayhem difficulty or above, without killing any medics.

"A golden syringe. Because you've sent enough medics to the hospital to solve their staff shortage problems for good."
—Trophy description

A Medic engaging the player during the Safe House Raid. 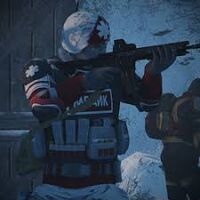 A Medic as seen in Boiling Point.
Community content is available under CC-BY-SA unless otherwise noted.
Advertisement