"There is a little something I need you to fetch me from the Murkywater Warehouse. Hehehe... a quick smash and grab."
—Vlad offering the Heist

The Meltdown heist is a free heist for PAYDAY 2, released on May 7th 2015 as part of Update #67. Being the sixth contract by Vlad, it involves the crew attacking the same Murkywater warehouse they broke into during Shadow Raid, to secure several nuclear warheads.

Stealth is not an option this time around.

"Last year, in Shadow Raid, we launched a silent midnight burglary on the Murkywater warehouse down on the docks. Today, we’re headed back. Vlad has received word that those shady mercenary bastards have some fresh merchandise in stock. Vlad’s being cagey about what it is, but he’s offering top dollar for it. The catch: we need to move fast. No time for any planning, and stealth isn’t an option. The Murkies will be on point and will respond fast. So it’s safeties off from the first moment. Hit it hard. Hit it like a bomb."
—Heist Briefing

The heist involves the player crew assaulting the same Murkywater depot featured in Shadow Raid, though this time in broad daylight and without any opportunity to buy non-basic pre-planning assets nor stealth due to Murkywater moving out valuable assets after the fail for security measures following Shadow Raid. Vlad takes this opportunity and offers The Payday Gang a contract to steal the unknown loot before Murkywater can move them out. The targets of this job are the many nuclear warheads, unbeknownst to Bain, secured in a vault hidden inside one of the Murkywater shipping containers scattered around the compound.

If the crew agrees to secure additional loot, the basic looting procedure is largely similar to Shadow Raid. The crew will need to obtain several crowbars placed randomly around the map to crack open the lootable shipping crates and bag the rest of the loot.

There are several forklifts parked at the yard and inside the warehouse that players can commandeer to quickly move up to three bags at a time from point to point, in order to more easily secure all available loot. There is one muscle car, named Longfellow, with a capacity of four loot bags parked near the gate that leads to the cargo train terminal. One must be careful, as while the Longfellow is fast, it has a large hitbox, making it easily susceptible to gunfire and immobilization if under sustained fire from one of the many SWAT Turrets found through the cargo hub.

Starting on an adjacent rooftop, the alarm will sound as soon as players approach the zip-lines into the main yard. Landing amongst the containers, players must open them until they find the hidden vault, identifiable as a metal door on one side and a cooling system on the other. Only containers at the front of the yard and inside the warehouse can be opened and are thus eligible for the spawn.

Only 2 players can use the initial zip-lines. If you do not desire for 2 players to wait, the others can drop down from the roof to an adjacent roof, then onto some shipping containers into the yard. Watch your feet!

Upon finding the vault, players must sabotage the cooling fans in order to overheat the temperature inside, forcing an emergency unlock. Finding a crowbar in the warehouse and inserting it into a fan will cause the thermostat (visible beneath the vents) to gradually rise; jamming additional vents will cause the temperature to climb faster, though only one is absolutely required.

Once the vault finally unlocks, players will find three to four secure cases, containing a total of six to eight nuclear warheads (very heavy bags). These bags must be transported to the loot drop-off (and escape) around 350 meters away. Given that the trip is long, the route contains several enemies on foot, snipers amongst regular enemies on the stacks of shipping containers, several SWAT Van Turret spawns and about half a dozen cops on the bridge over the trainyard, vehicles may be helpful. Unlike some other heists, the vans with the turrets are capable of moving to block certain paths, potentially forcing heisters to take different routes while hauling the loot.

Options include using the forklifts (which can carry up to 3 bags at a time) or the Longfellow muscle car (which can carry up to 4 bags and moves much faster) located towards the back of the warehouse. Since the car cannot be entered whilst carrying loot, and only four bags can fit in the trunk, either multiple vehicles or multiple trips will be required to secure all the required loot. Teams may wish to decide in advance whether to make multiple return trips with the Longfellow or make a single trip with the Longfellow and one or more forklifts.

Note that while the player in the passenger seat of the Longfellow can still shoot (by "crouching", which results in the character leaning fully out of the window) it may be preferable to stop the vehicles and dismount to eliminate significant threats along the route to the train yard. This is particularly important if clearing the route for players in forklift trucks, which are slower and less agile.

After securing the desired amount of loot, the players can board the train when ready to leave.

The warehouse beside the docks is registered to the Murkywater Private Security company. We were alerted to an incident there by a phone call from a private citizen. It is unknown what the Payday gang were able to remove from the premises.

My Notes: It’s telling that it took a guy nearby, hearing gunfire, to make the call and not the Murkies themselves. That means they don’t want us to know what was taken, and that scares me. I recommend applying more political pressure on those mercenaries. It could be something important.

Attempting this on a lower difficulty is recommended due to the time-consuming nature of hunting all the loot and the extra crowbar spawns. Crews should attempt a co-ordinated and rigorous sweep of the entire map, with the priority on seeking crowbars and opening all the containers and warehouse cages. Care should be taken to ensure that bags aren't taken back by the cops - the best options are either to load them into a vehicle or to place them in the alleyway towards the escape, as cops will not leave the yard to collect them.

Multiple trips will be necessary in order to bring all the bags to the escape, the crew will have to decide how to proceed but clearly the Longfellow is the easiest vehicle to take on multiple trips. Choosing to eliminate the SWAT vans may be a wise move.

First and foremost, attempting this on a lower difficulty is highly recommended, as the high concentration of enemies and snipers combined with having to move very heavy bags can make this difficult even on Normal. Further, players should equip themselves to deal with SWAT van turrets as it may be necessary to eliminate one or more along the way.

The heist can be completed as usual aside from avoiding the Longfellow, with players even using the forklifts as desired. Upon reaching the gate, there are two ways to progress: on foot, or by forklift. Players proceeding on foot have the comfort of moving as a unit and use of all four guns, along with freedom to place health and ammo bags. On the other hand, multiple forklifts can speed up the process significantly, leaving the drivers exposed but able to carry three loot bags on the forks and any other players on the back. A well co-ordinated team may even be able to drive the forklifts in reverse, allowing the passenger on the back to fire forwards.

Regardless of approach, players should take care moving along the paths, making sure to avoid the SWAT van if possible or simply eliminate it with high power weaponry. After finally reaching the train, players can end the heist as usual.

UNLOCK CONDITION:
Finish the Meltdown job within 7 minutes, on OVERKILL difficulty or above.

PLACEMENT:
Outside the Garage.

The best way to obtain the trophy is arguably the most straight-forward one: All crates are ignored and crowbars are jammed into the vault's vents immediately. One player takes a warhead-filled Longfellow to the train, two players take the remaining 4 warheads with forklifts, and a fourth player supporting the forklift drivers. 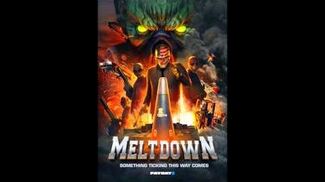