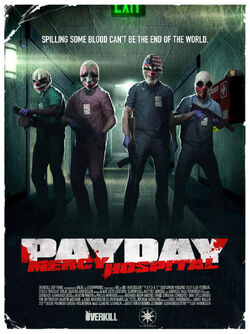 "Spilling some blood can't be the end of the world."
—Poster tagline.

No Mercy is a heist that takes place in Mercy Hospital, a location from the Left 4 Dead game series. It is exclusive to the PC version and was released on July 26, 2012, as part of Patch 11.

"We are hitting up the Mercy Hospital in a heist for blood. The source is carrying some kind of rare virus and we need to get it out of him. Let nothing stop us as the paycheck is a hefty one. Spilling some blood for this kind of cash is not the end of the world."
—In-game description.

The opening takes place in an elevator, where Bain explains the plan to the crew. They must find a patient who has the Green Flu, and extracts two samples of his blood. There is a random chance Bain will be interrupted by Bill from Left 4 Dead, entering the elevator as a brief cameo.

No Mercy may be carried out in one of two ways. The first of which is a stealthy approach, without triggering the alarm. The second approach, or "Plan B," only occurs in the event of the alarm going off.

Plan A is the stealthy approach to the heist. If carried out correctly, the alarm will not be raised and the police will not arrive until the second phase of the mission.

After exiting the elevator, the crew will find themselves in the lobby of Mercy Hospital. Civilians and doctors are distributed randomly throughout the area, with the majority being located near the reception desk. Several security cameras will also be placed in random locations. Bain will alert the crew that once they begin the heist, they will have seven seconds to destroy every camera. He will also state how many cameras there are, this will vary depending on how many players are connected. There will be three cameras if the player is alone, six if there are two players present, and nine if there are three or four players. Bots do not count towards this.

Once the heist begins, the crew will have seven seconds to destroy every camera. This must be done with either the B9-S, Mark 11, or a melee attack. If the cameras are not disabled within this time, the alarm will be triggered. Afterward, the crew must keep the civilians down. Some of them will run for the three-alarm buttons; if any of them are hit, the alarm will be raised. These buttons are located near the elevator, in the hallway near the staircase, and behind the front desk. If any of the hostages are killed the alarm will go off, due to the stress causing heart attacks in patients with pacemakers.

If the crew manages to stop the alarm from being triggered, they can continue with Plan A. This involves checking the patient database to locate the infected individual, answering the phone and letting Bain deal with the callers, and locating a file on the target patient. There is a chance a guard will spawn from the bottom of the staircase, if he is not dispatched before he reaches the top, the alarm will go off. There is also a chance of construction workers spawning in the same location, or civilians spawning from the elevator. They will all make a dash for the alarm, if not stopped by the crew first.

After locating the file on the target patient, the crew must set up four "fake sentries." These will stop the civilians from getting up, therefore stopping the chance that one may hit an alarm button. The crew then suits up in scrubs to infiltrate the ICU (Intensive Care Unit).

This begins the second phase of the mission. The crew will enter the ICU and be greeted by Doctor Eriksson. She will give them a tour of the three Isolation Ward Units, and go into detail regarding the various patients' symptoms. After visiting the three units, she will return to her starting position. The crew may ask her to take another lap, where she will go into further detail about their blood pressure and how long they will have to stay in Intensive Care. After this, she will no longer give information about the patients. Based on the information she provides, the crew must decide which chamber locates the target. An alarm box located in an unfinished room will have three colored wires, each leading to a chamber.

Once the heist begins, the crew will have a short time to cut one of the three wires in the alarm box, thus disabling the shutter to the corresponding chamber. After a wire is cut the alarm will inevitably be triggered, thus ending the stealth portion of the heist, and the police will be alerted. Provided the correct chamber wire was cut, the crew will have access to the target patient. He can be identified by the tattoo on his neck. If the wrong wire was cut, the crew must use the saw hidden in a "Teddy Moo" doll located in the lobby to saw open the other chambers and find the target.

If at any point during the first portion of the heist the alarm is triggered, Plan A will fail and an assault wave will immediately begin. The crew must grab the saw hidden in a Teddy Moo doll, which is located in the lobby and saw their way through the doors leading to the ICU, and again on the shutters guarding the Isolation Ward Units. Behind one of the three shutters is the target patient. The crew has no way of knowing which chamber houses the target, and may end up having to saw open all three to locate him.

Once the target patient is located, regardless of which plan was executed to access him, the crew must extract blood samples from him. These samples must then be put in testers, which are available in various rooms around the hospital. The samples may break while being tested, leaving the tester temporarily unavailable. After a sample is successfully validated, it may be picked up by a heister. This will allow the crew to call for the elevator which will be used for the escape. At this point the police may cut the power to the hospital, stopping the elevator and killing the lights. The crew must locate a circuit breaker and restore power, and then recall the elevator.

Two validated blood samples must be acquired to proceed, they will be stored in a cooler in the elevator. If a heister is downed and enters bleed-out mode while carrying any blood sample, valid or untested, the vial will break and will be lost. Once two valid blood samples are placed in the cooler and the crew is in the elevator, the elevator will attempt to go up to the roof to be retrieved by Bain in a helicopter. At this point, the police will retreat, and the army will start firing missiles at the hospital. The elevator may reach its destination and the crew will escape in the helicopter, or the elevator may fall to the bottom. In either case, the crew must pry open the emergency hatch with a crowbar to escape the trapped elevator. In the event of the elevator falling to the basement level, the crew must make a breakthrough the morgue, passing by several squirming body bags. The heist ends once everyone reaches the end of the hallway.

"A" denotes an objective for Plan A (stealthy approach), and "B" for Plan B (alarm is raised before the crew reaches the patient). 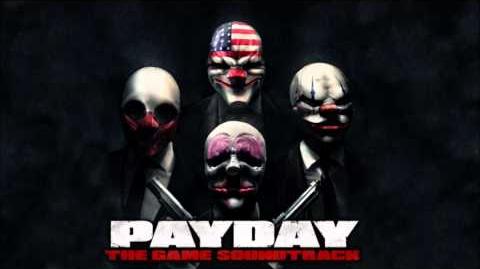 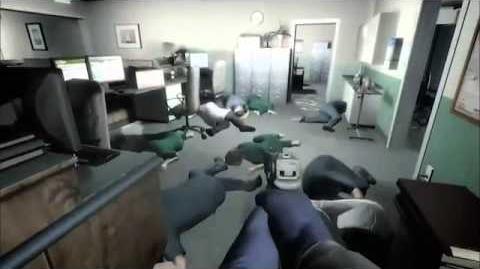 Payday The Heist No Mercy
The Playthrough of No Mercy.