"A saw? Jesus, who are these people?!"
—A law enforcer startled by a crew member brandishing an OVE9000 saw

The OVE9000 saw is a special weapon available in PAYDAY 2.

Although its intended purpose is for cutting open objects in the game, the OVE9000 can also be used to quickly kill enemies within melee range. However, unless the appropriate skills are unlocked, it should not be used frequently as a weapon due to the low durability of its blades and the fact that regular pickups do not refill its ammo. The saw can be used to open objects with the saw symbol, such as:

The OVE9000 can be improved with the following skills;

A preview of the OVE9000 backside 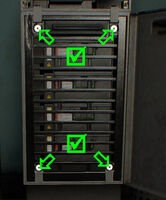 Where to saw to open the ATM's inside. 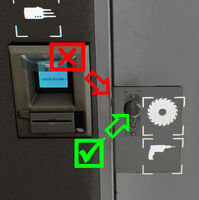 Where to and not to saw a security door.
Русский
Community content is available under CC-BY-SA unless otherwise noted.
Advertisement