You can unlock this mask by completing the Hoxton Breakout heist. It can't drop during a payday and it can't be sold. Instead, it can be returned to your mask stash for free, but any pattern, color or material as well as the customization fee to put these together will be lost. 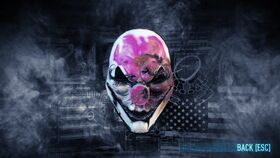 The Hoxton Reborn mask is a mask that Hoxton made while in prison. For him, it's a symbol of everything he experienced in the past years while the PAYDAY gang kept on going without him. No one knows how his experiences in prison has changed him, and he won't talk about it when asked.

All we can assume is that he has been changed forever, and that he is reborn into... Something different.
THIS IS AN INFAMOUS ITEM!

The Crook is a versatile criminal. The term is as old as crime itself.

Truly, the crook is a jack of all trades and a master of none. He steals, lies, cheats and does any and every dishonest or illegal work necessary to get by.

Retrieved from "https://payday.fandom.com/wiki/Old_Hoxton_Character_Pack?oldid=166973"
Community content is available under CC-BY-SA unless otherwise noted.