PAYDAY: The Web Series directed by Demian Lichtenstein is the main advertising and first look into the backstory of the new game by Overkill Software, PAYDAY 2. There are a total of six episodes in the Web Series. While there have been rumors of a 7th episode in development, nothing about has been confirmed about the existence of said episode.

Every episode of the web series were officially released on Steam as of the Jacket Character Pack update. They can be viewed here.

Demian Lichtenstein. The director, producer, and co-writer of the PAYDAY: The Web series. He is best known for directing 3000 Miles to Graceland. Lichtenstein directs and also plays as the character Lucas in Episode 3, "Hector", as a "bullshit Hollywood producer" who is helping Hector, a Colombian drug lord, to smuggle cocaine loads in his next Hollywood movie.

Eric Etebari is an American film actor, director, and producer. He has worked in films such as 2 Fast 2 Furious, Cellular, and The Lincoln Lawyer. In the PAYDAY: The Web Series, Etebari plays as Dallas, the self proclaimed leader of the PAYDAY Gang and is also the bank manager of First World Bank (Web Series). Dallas is also the older brother of Houston played by Derek Ray. Eric Etebari is the in-game model of Dallas in PAYDAY 2, however Dallas is voiced by Simon Kerr.

Derek Ray is an American television film actor. He is known for his in shows such as Mad Men and Southland. In the PAYDAY: The Web Series, Ray plays as Houston, the cocky jokester of the PAYDAY Gang and is the younger brother of Dallas played by Eric Etebari. There is little information about what Houston does outside the group. Derek Ray is also the in-game model of Houston.

Ulf Andersson is a Swedish lead game designer at Overkill Software. He is known for co-founding Grin, a Swedish game company with his brother Bo Anderrson (CEO of Starbreeze studios). Andersson is also the co-founder of Overkill Software. In the PAYDAY: The Web Series, he is known for playing his character Wolf, he is the only character in the Web Series to be inspired, voiced, and acted by Andersson himself. There is little information about his life outside the PAYDAY Gang in the Web Series. Wolf is now played by Christian Hicks. During the first two episodes, Wolf was credited as himself.

Christian Hicks is an American film actor. He is found to be the new actor and there isn't any information out there to date his official career. This may be his first time portrayed as a main character in a show. He now plays as Wolf in the PAYDAY: Web Series.

Damion Poitier is an American film actor and stuntman. He is known in films and television shows such as Jarhead, The Avengers, and True Blood. In PAYDAY: The Web Series, Poiter plays as Chains, the Enforcer of the PAYDAY Gang. Chains is known for his military tactics, quick thinking, and positive personality. There is little information about his life outside the crew.

Digger T. Mesch is an American film actor and producer. He is known for his role in various films such as Ultraviolet, Vampire Effect, and Mental. In the PAYDAY: Web Series, Mesch plays as the global private entity known only as Bain. Bain is the "Brain" of the PAYDAY Gang from which his name derives from. There is little to no information on exactly who Bain is outside of the crew. The only thing people know is, he is the creator of Crime-Net, has thousands of contacts and he has his fingers in every major crime done within D.C. The name is synonymous to crime and he only contacts the best of the best. Bain is the only other character from the web series to be voiced differently in PAYDAY 2. The lead composer of PAYDAY 2, Simon Viklund, voices Bain in PAYDAY 2. 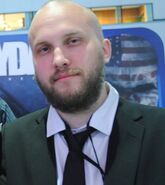 Ilia Volok is a Ukrainian actor known for his roles in Indiana Jones and the Kingdom of the Crystal Skull, The Curious Case of Benjamin Button, and Air Force One. In the PAYDAY: Web Series, he plays Vladislav "Vlad" Kozak, a former Ukrainian mob boss.

Gary Daniels is a British film actor and a professional kick-boxing champion. He's known for films such as The Expendables, Fist of the North Star, and Hunt is Kill. In the PAYDAY: Web Series, he plays Hector Morales, a Colombian cartel boss whose gang is fighting the Mendoza cartel for criminal dominion of Washington D.C.

Bokeem Woodbine is an American actor whose roles in action movies have made him famous. In the PAYDAY: Web Series, he plays Congressman John Henry Simmons, known on Crime.Net as The Elephant, a Republican senator and Crime.Net contractor.

Dash Mihok is an American actor, whose famous works includes "The Day After Tomorrow", "The Thin Red Line" and "Punisher: War Zone". In the PAYDAY: Web Series, he plays Gage, an Afghan war veteran and black market weapons launderer.

Beatrice Rosen is a French-American actress. She is internationally known for her role in the film 2012 (2009). In the PAYDAY: Web Series, she plays Special Agent Jordan Griffin, an fbi agent trying to learn about and take down the Payday Gang. 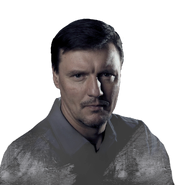 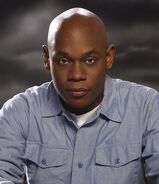 Bokeem Woodbine as "The Elephant".