During World War II, the Nazis are on the verge of winning the war in Europe, bullets do little as the Nazis seem unstoppable. However, 4 bank robbers are brought together with a purpose, rebel against the Nazi oppression and sabotage the Nazis' chances of victory by sabotaging, assassinating, stealing, and pulverise anything bearing the Swastika.

RAID: World War II was announced in mid-2017 as the first "proper" gaming project of Lion Game Lion, who up to that point was only known for producing addon content for PAYDAY 2. As a result of that experience, the team chose to work with the same Diesel engine that PAYDAY used.

The game as a whole had a budget of around $8 million, and was financed by Starbreeze.

The core gameplay of RAID is similar in essence to that of PAYDAY 2 but with some major changes, most notably a sense of continuation between each mission unlike the former's disjointed timeline. RAID also puts a heavier emphasis on strategic assaults and team co-ordination than PAYDAY, and will allow a greater range of map interaction such as using gun emplacements to shoot down aircrafts. Vehicles will make significant appearances throughout the game and can be customized.

Overseeing the RAID crew's progress is Control, a British Special Operations Executive officer, who fills the same position as Bain, but with a less-hands-on approach, leaving much of the operations to the four player characters to carry out. Acting as a liaison between Control and the Raiders is Mrs. White, who will provide the players with a brief rundown of the missions prior to execution.

RAID features a four-class system similar to the initial versions of PAYDAY 2, and like the mainstream series are not tied specifically to any of the announced characters.

Since the Raid crew don't make use of iconic face masks, the player customization mechanic in RAID instead allows for unlocking and equipping different outfits, which typically consists of a top (shirts, vests, tanktops, etc...) and a bottom piece (trousers and shoes). Outfit parts can be freely mix-and-matched, allowing for a relatively large number of combinations.

With the exception of promotional apparel, outfit parts are typically given out at random when completing a mission.

RAID seemingly uses a modified version of PAYDAY: The Heist's weapon modding system, in that most mods only offer boosts to one single stat along with changing the model of the relevant weapon parts (e.g. Ammo Increase mods give a weapon extended magazines). Weapon mods have level locks and would require a certain amount of kills made with any given weapon before they can be used. Once unlocked and equipped, a modification will stay on permanently until superseded by the next successive Tier.

Each class tracks its weapon and modification progress separately from each other, and some weapons may unlock earlier or later depending on the class currently playing as. While weapon upgrade Tiers 1 to 3 are freely available on any weapon for any class, Tier 4 upgrades can only be unlocked and equipped by the specified kits (e.g. only the Insurgent class can have a fully-modifiable Thompson M1A1).

Because it uses the same engine as PAYDAY 2, modding tools normally used for PAYDAY 2 can also be used for modding RAID. Currently, mods can be made and installed using Bundle Modder. Be warned that any mods installed using this method must be uninstalled before any game update or else the game will crash on startup.

In a developer stream, Lion Game Lion confirmed that there will be official modding support for the game that will be worked on after sorting out issues on launch.

As it stands, no DLC has been added to RAID and it is unlikely any will as the game is no longer supported.

Pre-purchasing the game awarded the player with an Army Chest containing the following:

The Army Chest and its contents were available until September 27 2017, when the full game unlocked. 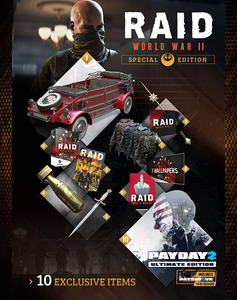 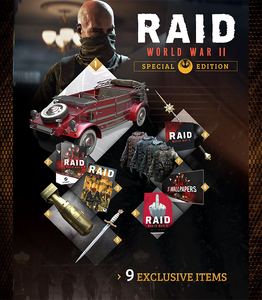 A Special Edition of the game is offered alongside the standard package and contains the following:

Players who purchased the Special Edition before September 26 2017 are additionally granted one free copy of PAYDAY 2: Ultimate Edition, or an upgrade to the Ultimate Edition if they didn't own it already.

August 31, 2017 saw the release of the RAID Beta for all non-German owners of PAYDAY 2, while a censored German beta was released September 8. The beta lasted until September 17. An open beta was available September 2 and 3.

The beta build consisted of heavily toned-down versions of the final content. At release, only the starting weapons were available for each class along with a shared sidearm (C96 Mauser), one melee weapon, and a level cap of 5. Update 1.1 raised the level cap to 10 and added a limited selection of cosmetic items for each character along with an unlockable melee weapon, and Update 1.2 upped it further to 15, along with four more weapons to unlock and use (M1 Carbine, BAR Heavy Rifle, M1 Garand and Thompson M1A1).

Five missions were available to play during the beta (Odin's Fall, Hunters, Trainwreck, Tiger Trap, and The Amber Train) and a stripped-down version of the base Camp. Earned gold could only be spent on respeccing skills, as the items that required gold to buy were not implemented.

RAID's reception (although hopeful at first) quickly turned negative. With the game being panned as a copy of Payday 2 and having overall mediocre gameplay and content. The game would soon die shortly after a year into it's lifecycle. The only attention RAID gets now is from its meme status in the Payday community, and the very few players it has.

Retrieved from "https://payday.fandom.com/wiki/RAID:_World_War_II?oldid=184567"
Community content is available under CC-BY-SA unless otherwise noted.