The SWAT Turret is a special enemy in PAYDAY 2, unlocked on February 10th 2015 as part of The Hype Train community event, at 300,000 gallons of hype fuel. It was released during the Spring Break Event (13-21 March) on day 5.

While commonly mounted on SWAT Vans in open outdoor areas, they can also appear under helicopters, and indoor turrets exist mounted on the roof.

"An expensive but effective piece of kit. This converted armored truck sports a remote-controlled turret. It can lay down a huge amount of suppressive fire in its field of view. The turret itself is also heavily reinforced, with the main part of the gun being protected by plates of ballistic armor.

My Notes: The introduction of these mobile turrets was inspired. They’re damn near indestructible. Not the most accurate, but capable of laying down some withering suppressive fire. Still need to drill our teams more in their tactical use - I want to see SWAT teams pushing the Payday gang into the FOV of these turrets."
—FBI Files Description.

The SWAT Turret is usually composed of a black armored SWAT van with an automated turret on top of it that features a laser targeting module. The Turret is stationary and acts as the law enforcer's version of the sentry gun. The turret itself has a medium attack range, but when made friendly with the use of an ECM jammer, it gains a significant range boost, capable of gunning down even Snipers if it happens to scan over them. A loudspeaker-like voice will announce when a SWAT Van Turret is about to enter the field and deploy (although due to bugs, this may not appear on Four Stores with specific RNG). Helicopter, ceiling and AA guns do not have this warning.

Despite being mechanical, the SWAT Van Turret does have an applied "headshot" damage multiplier. Once the armor plates surrounding the targeting lens are destroyed, the fragile lens becomes exposed, which serves as the unit's "head", and any shot landed there will receive a 100x damage boost. Due to this, this special unit bears many similarities to a Skulldozer, albeit a stationary one.

As of Update #86, the Van Turret gained a minor self-repair ability that causes the gun platform to retract into the vehicle briefly before emerging at full health. A SWAT VAN Turret can only self-repair up to three times and any destroyed armor plates will regenerate. Ceiling-mounted turrets do not have this ability, however will retract between Assault Waves to never return. AA guns remain deployed until destroyed or disabled (Henry's Rock). Helicopter-mounted turrets will undergo repairs, but will not retract into the vehicle, allowing players to continue firing on a target that won't return fire at all, greatly helping out teams able to destroy them before the repairs are complete.

SWAT Vans will also deploy tear gas to ward off players who attempt to get up close.

Interestingly enough, this turret design seems to have caught on elsewhere around the world and is not unique to the FBI. As observable during the incursions of several specific locations, it appears that rich and powerful individuals and PMCs such as Murkywater and Ernesto Sosa can acquire their own turrets for their own defense. Even the US government employs them as seen in The White House heist to guard the vault containing the presidential pardons. These turrets are often mounted to the ceiling or other high-hanging structures so as to allow them to drop down and engage targets without obstructing the path of ground units. The Mexican Police has also borrowed the idea of a SWAT Van Turret and deploys it against criminals in the San Martín Bank.

Like Cloakers, the turret tends to spawn in set locations, but can appear at any time (with an occasional radio announcement alerting players before and when a SWAT van will enter the scene). Rather than spawning immediately, the turret can remain dormant inside any SWAT van in the map, instead unfolding only when one or more characters ventures too close. As such, players should exercise great care in the maps above lest they put themselves at risk of a surprise attack.

Instead of using audio like other specials, the turret instead relies on visual means to telegraph its attacks. Whilst the laser obviously indicates the direction of attack, the colour indicates its status: red means hostile to the players, amber indicates the eight second reload is underway, green means friendly to players (and hostile to law enforcers), and flashing green indicates the ECM controlling it is about to end.

Note that because the SWAT van itself isn't destroyed (only the turret) the SWAT Van Turret cannot respawn. Unless they can be avoided, players should co-ordinate to destroy SWAT Van Turrets and then resume normal heisting.

The turret has a very high total health, though this is partially countered by damage multipliers granted to players. Additionally, the reason for its (at least initial) durability is due to the armor plating on the front: impenetrable even by armor piercing rounds, players must whittle away at the plate in order to expose the turret's weak point, the targeting lens.

Damage against the plate is capped at x7 for explosives, with an additional cap applied after that prevents any type of attack - bullet or explosive - from dealing more than 3500 damage to the shield or 42,000 to the base, meaning that a high damage weapon such as the HRL-7 will have much of its potential firepower negated; this is additionally restricted as the damage stacking caused by hitting multiple armor plates (as seen with Bulldozers) does not apply to the turret. As such, massive damage weapons like the aforementioned HRL-7 and Thanatos .50 cal, will be very inefficient, whereas the GL40, Frag Grenades or a shotgun with HE Rounds are highly recommended.

An effective way of taking down the shield is with a single Molotov Cocktail thrown on top of the van and next to the turret, the grenade will completely burn through the shield during the course of its duration, even on Death Wish difficulty. This is far from being foolproof, however, as to deal maximum fire damage very careful trajectory calculations must be made prior to throwing, which is hardly feasible when under suppressive fire, and thrown Molotovs can be shot out by the turret if it's still active when the player pops out of cover to toss.

For this reason it is very dangerous to attempt to use the HRL-7 on the turret while it is firing at you because the turret's high rate of fire means it can shoot down the rocket as soon as it's fired, downing the player in line-of-sight of the turret where it will be hard for others to revive you. If using the HRL-7, get someone else to distract the turret or wait for it to reload in order to safely hit it.

Once exposed, the targeting lens (where the laser is emitted) can be damaged. It is highly recommended players concentrate fire at this time, abusing the x100 damage bonus with automatic or high-damage weapons and working together to quickly finish it.

A Thanatos at this point can one-shot it on the Overkill difficulty and below (2 on Death Wish).

Another way to deal with the turret is to deploy your own sentry gun to fight fire with fire, or use it as a distraction to allow the rest of the team to flank and destroy the threat. If your sentry gun has a shield it will prove a big advantage, since the bulletproof plating can block all attempts at dealing damage from the SWAT Van Turret.

The turret has a rate of fire of 1000 rounds/minute, so it is advisable to confront it while it's focused elsewhere, friendly, or performing its 8-second reload (yellow laser). The turret's damage also increases with difficulty, and carries a x4 damage multiplier at less than eight metres; combined with 400 round magazines, players must either combine heavy armour (or cover) and distance or very high dodge and speed lest they be ripped to shreds. Due to how dodging and taking damage works, it is possible to continue dodging for as long as the turret shoots the player (with no other units doing so) while taking no damage, making for a useful distraction to take on the turret.

Should players get between ten and eight metres of the vehicle, damage begins to severely ramp upwards from x1.1 to x4 as they approach and, should a player deal reasonable damage when less than eight metres away, they will be subject to flashbang attacks from the turret. With the turret receiving a maximum multiplier of x4 for those within an eight metre radius, the damage of every bullet stacks accordingly:

Placing an ECM anywhere on the map will cause the gun to temporarily target law enforcers, the targeting laser changing from red to green to reflect this. When the ECM's effect is almost over the laser will flash notifying heisters to move to cover before the turret turns on them.

When the turret is friendly, nearby law enforcers will attempt to seek cover instead of attacking it. Players can either move through open ground while the turret covers them, or take advantage of its lack of hostility, by exposing or destroying the targeting lens, especially when the ECM is about to shut off.

If a team lacks the firepower to completely destroy a turret or skills to hamper it, there are two key weaknesses that can be used against it:

Players are strongly advised to either finish up whatever task they need to do or even vacate the scene if the radio announcement for the SWAT van turret is heard. Being an effective form of area denial, the turret can unleash a torrent of bullets at particular areas and easily prevent players from hanging around at where it can fire at team members. 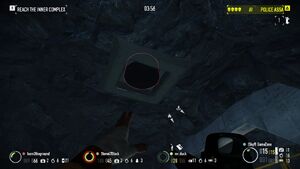 "You had to swat some wheels to get this beauty."
—Trophy description

UNLOCK CONDITION:
Finish the Diamond Store heist with all bags and destroying the SWAT Turret, on OVERKILL difficulty or above.

A ceiling-mounted version of the Turret. This is the model encountered during Scarface Mansion.

"Impossible to break this. Shoot the glass!" 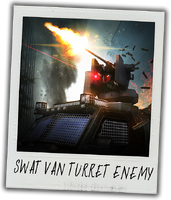 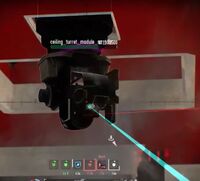 With the front shield removed, we can clearly see it's basically the gun, camera, and laser module flipped upside-down.

An FBI chopper with a turret on it's belly.

The "Vulcan Minigun" turret appears to have the original body from the Payday Gang's Vulcan Minigun modified with a shield and a camera. 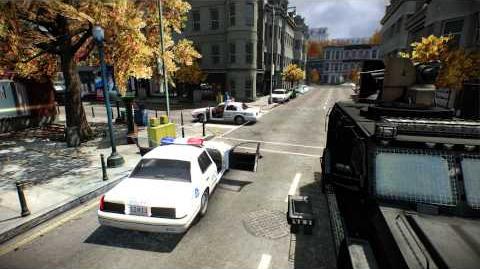