Vlad catches wind of the Payday gang's operations in Mexico and requests some help while they're still there. Apparently stealing the Murkywater plane in Mexico caused problems for not only The Dentist, but for Vlad as well, and that the Payday gang kind of "owes him one".

The Coyopas own a bank in Mexico, the San Martín Bank, mainly using it to host illegal activities like money laundering. They also hold some Russian Treasures of the Romanov Dynasty that Vlad claims to be family heirlooms.

Break into the bank and reclaim Vlad's loot to keep the Ukrainian happy.

Players are given 10 favors in this heist. Most of the assets are extra loot drop offs. Vlad can also arrange a surprise loud entry to throw the cops off their feet. Template:SanMartínBank/PrePlan

Players start outside around the main fountain area right in front of the bank. The first objective is to get inside the bank. You can either walk through the main entrance while still in casing mode or walk in through the sides; the left side leads to a staircase to the three levels of the building the the right side has scaffolding which you can shoot the tag off the fire escape ladder and the ladder will drop down.

First major objective is to locate the manager's safe. The safe will be in the manager's office, which is located in the middle of the back of the staffroom, hidden behind one of the bookshelves. Rummage through the books until the safe is located. Next, you will need to grab some tape from a tape holder. The tape holder will be around or inside the large meeting room or on the manager's desk. After getting the tape, you will need to find the manager's coffee cup, who the manager himself is usually right next to, so getting around him without alerting him will be quite difficult. After obtaining his fingerprint, go back to the safe in his office and open the safe to obtain a key to unlocking one of the security gates (opening one opens all). This entire process can be bypassed by drilling any one of the security cage doors (240s drill without Drill Sawgeant), and drilling that door will only open that door, so it may not alter guard patrol routes.

After unlocking the gates, go through them to find the door to the vault. Similar to The White House's west wing, there will be a RFID reader, which upon being interacted with, will display two colors lighted up; red, green, blue or yellow. You will need to find several power boxes and cut the wire corresponding with the two lighted up colors. However, unlike the White House, the power boxes do not display a color and will display a number. In order to find out which wires to cut, you will need to locate a blueprint manual in one of the ground floor back rooms which tells which number corresponds to which color. After finding the manual and studying it, locate the boxes and cut the wires based on what the manual displays. For example if you need to cut a red wire and the manual says that number 736 is the red wire, find the power box with the number 736 and cut it. If you spend too long looking for a box, a correct box will eventually be marked out for you.

After cutting the wires, go back to the door with the RFID reader, which should be now open, and go investigate the vault. The vault will require a 4-digit code to open. There will be a note on the side giving a name to whomever is on vault duty. Find the the office seat of the name in question on the first floor staffroom. After finding the computer, hack it to initiate a 30s hack, after which it will display the 4-digit code necessary to open the vault. Return to the vault and plug in the code. If you spend too long looking for a computer, the correct computer will eventually be marked out for you.

With the vault door open, another problem presents itself; lasers. The lasers completely block the entrance to vault so no way around. The lasers will need to be deactivated by turning the power off from them. The power box to the lasers will be in one of the two rooms on the roof (one guard patrols the roof). Go to the roof to deactivate the power and return to the vault and loot it. Lasers can be deactivated at any time.

Entering the bank will be the first objective. You can enter by drilling through one of the metal gates to get inside. Alternatively, buying the Vlad's Surprise asset from preplanning will bring Vlad's brother in law in and he will ram his car into the bank entrance. You must then attach the winch to the bank teller window and signal him to yank the door off, before driving off. Doing this will provide a quick and simple way into the bank without having to wait for the drills.

With the alarm sound, there will be bars blocking the vault from entry. You will need to disable them by finding the server room in one of the back rooms. After you find it, you will need to locate the IT guy on the upper floor. He will be a man in a white shirt and black trousers with short black hair and glasses, getting close to him will highlight him in yellow. Escort the IT guy to the server room and he will start the hack. The federales can interrupt the hack by turning off the power, after which it will need to be manually turned on again and shouting at the IT guy.

With the security bars turned off, you can enter the vault room. However, due to Vlad's poor information, the vault is not easy as thought and will need to be cracked open with The Beast, the same drill used in The Big Bank. Run outside and signal Bile to send three bags of The Beast. Move each of the three bags to the vault and start the drill. Similar to the Beast in the Big Bank, the drill cannot jam, however it will malfunction a bit and will need to be repaired with spare parts. There will be a van outside whose back doors can be opened. Open the doors to the van to find a box filled with spare parts, and return to the Beast and repair it, this can occur up to 4 times. After the vault is finally open, you can bag the loot. If you bought the zip line asset, you can send the bags to the zip line and it will send it right outside the van, but this does not secure it, and the Mexican police can still steal the bags. Be careful as Snipers will be stationed on the church and SWAT Van Turrets can be deployed outside and near the escape van, which can quickly down heisters. After securing all or enough loot, get to the escape zone and leave.

All cameras will become Titan cameras.

San Martín Bank does not have an entry.

"Oh, boy. Vlad's gonna be pissed if he finds out you didn't burn this. But, what's so special about this particular message? It's no secret he always plays several angles..."
—Trophy description

UNLOCK CONDITION:
Search a little extra in the vault of the San Martín Bank.

A Mexican Skulldozer
Add a photo to this gallery 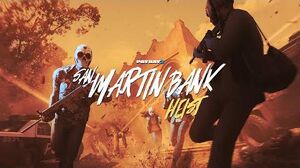 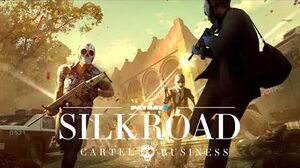