"My name is Sangres, and I have seen much blood."
—Sangres introducing himself.

Sangres is a former Mexican Sicario and the eighteenth playable character in PAYDAY 2. He was released for free on May 4th, 2017 alongside his signature weapons and perk deck to celebrate the annual Cinco de Mayo festival.

Sangres is a dangerous man. He spent many years working as an enforcer and assassin for a drug cartel in Monterrey, Mexico. Then one day he decided to defect and crossed the border to the US, looking to make the big bucks. Gage introduced him to the Payday Gang. He's as skilled as he is ruthless and with those revolvers he can really light things up. And yeah... check out that razor-sharp machete. 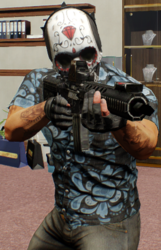 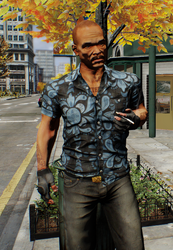 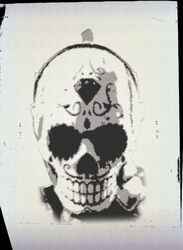 Sangres' FBI sketch from just after he was released, showing his mask instead of his face.

Artwork of Sangres for the Master Plan DLC bundle for Crimewave Edition, along with Scarface.