The Scarface Character Pack is a DLC pack for PAYDAY 2, released on December 15, 2016, alongside the Scarface Heist DLC.

You will unlock 1 of both masks in your inventory upon purchase of the DLC. They can't drop during a PAYDAY and they can't be sold. They can both be returned to your mask stash for free, but any pattern, color or material as well as the customization fee to put these together will be lost. 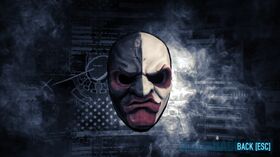 Scarface came to the US with nothing more than two empty hands and a bad attitude, the darkness in his heart matched only by the brilliance of his criminal mind. His mask tells the story, complete with the trail of blood he left in his wake as he began to make his mark.
THIS IS A SCARFACE CHARACTER PACK ITEM! 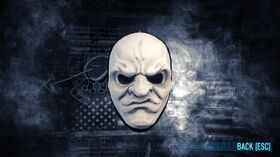 This is a clean version of the iconic Scarface mask, before it was painted.

Never liked how the original one turned out? This is your chance to change history.
THIS IS A SCARFACE CHARACTER PACK ITEM!

The Kingpin Perk Deck is like the kick of a mule on crack. Stab yourself with this loaded injector and you’ll cease to feel pain and become completely fearless for a short period of time. Thanks to the loaded mixture of chemicals running around in your veins, you will be able to rampage through the battles like a maniac, scaring the living shit out of your enemies.

The Kingpin is the boss, an autocrat whose every whim must be obeyed. But you gotta get the money first. Then when you get the money, you get the power. Remember, the only thing in this world that gives orders...is balls.

Retrieved from "https://payday.fandom.com/wiki/Scarface_Character_Pack?oldid=166976"
Community content is available under CC-BY-SA unless otherwise noted.