"I have been running guns in the Caribbean for a while. It's been very profitable, but some of the old movers in the region don't approve of my presence on the local market. The Bolivian Sosa Cartel specifically. As they could not compete with me on level terms, they decided to attack my operation - sinking one of my ships, stealing my merchandise and killing my operatives. That was very unwise. Now they must pay. You will collect that payment, in blood."
—The Butcher offering the heist

Scarface Mansion is a heist released with the Scarface Heist DLC, released on December 15, 2016, the first heist contracted by The Butcher since The Bomb Heists.

Similar to Hoxton Revenge, this heist involves the player gang trying to infiltrate an estate, gaining access to a VIP's personal quarters and assassinate them while pilfering their loot stash in the process. It can be completed silently or in loud combat.

The heist begins with players at the entrance of the outside mansion property. Multiple gangster guards are stationed around the perimeter, alongside with security cameras (titan cameras on Mayhem and above). Players can go in guns blazing or utilize stealth to complete the heist.

In any case, Bain informs the crew to find the head of security who is located somewhere outside. He is identified with his green outfit and will be located at a random location, such as the docks or near the parking lot. Like Chavez from Panic Room, he is easy to defeat and upon his death, he will drop the needed USB stick. If players have gone loud, he may have additional gangsters to protect him and the police force will not arrive until his death.

The laptop that needs to be hacked will be in a random location, either in the tool shed near where players started off or in a garage close to the docks. As it is being hacked, players will need to find the corresponding circuit box to lockpick and rewire it to continue the hack which can occur at least twice. After it is completed, the doors to the mansion will open.

If a stealth approach is favored, be sure to mark guards and ensure a chosen route is clear of them. If the camera feed asset is bought, it can be used to spot other guards and the head of security. However, it will be positioned in an area where guards will frequently patrol.

The head of security is technically a security guard, and will be marked as one. As such, if he is alerted, it is advised to quickly eliminate him before he alerts the operator or fires his weapon. If he spawns in the dock area, a silenced shotgun can be used to shoot his body into the ocean without having to bag the body. However, even though he is a security guard (and thus an enemy) he will not drop ammo upon his death.

After players gain access to the mansion interior, they must open the rest of the compound and avoid the inside security. Guards patrolling the mansion interior are equipped with pagers, unlike their outdoor counterparts. The Butcher mentions she smuggled a microphone recorder in a bag of yayo somewhere in the mansion.

After it is found, the player with it must initiate a phone call to trick Ernesto Sosa. The alarm will sound if a player disconnects from the phone call interaction before it is completed, similar to a pager.

Once it is done, the security doors to his office will open and after lockpicking the room door, players can sneak in to quietly eliminate him. After it is done, the floor safe can be quickly raised to bag the loot.

Eventually, The Butcher herself radios in and tells the crew in order to bring Ernesto Sosa out, they will need to infuriate him. To do this, they must destroy his treasured possessions. Bain points out that he sees numerous paintings scattered throughout the different rooms in the mansion. Bain suggests the gang gathers the paintings in a pile and burn them (the amount will adjust according to the difficulty). The two locations to pile the paintings are either the courtyard or the roof. If not picked up earlier, a player should search for a can of gas scattered around the map while the others take the paintings. After the pile is lit on fire, Ernesto is outraged, but not enough to confront the crew.

The Butcher points out that the paintings wern't enough to enrage him into coming out to fight. Bain calls in Bile to airlift several cars he sees outside the mansion. Players are required to attach a magnet to said car. The first two cars will be dropped in the ocean, and as for the third, Bile gets creative and drops it directly on the mansion. Finally, Ernesto gives in to his fury and opens the rest of the compound.

Additional gangsters and ceiling turrets are fought in the newly opened area. Unlike other heists, the turrets are very easy to defeat but still inflict the same amount of damage like a normal version. After they are defeated, the doors to where Ernesto is are opened, allowing the crew to finish him for good.

If the alarm is sounded before players can reach Ernesto Sosa, the safe beneath the floor must be lifted upwards with winches and they must not be interrupted. Once done, players can secure the yayo or/and the money bags at a random escape point. It will be either the escape van from where they started from, a boat at the docks, or at a driveway far away from the mansion property.

A Miami Beach mansion rumored to belong to the Sosa Cartel was hit in the early hours of the morning. One of the bodies identified on the scene bore a strong similarity to photos of Ernesto Sosa, believed to be the Cartel’s top man in Miami. Confiscated security footage identified the attackers as the Payday Gang.

My Notes: What was the Payday Gang doing in Miami hitting the Sosas? We’ll have to partner with local law enforcement and investigate what the connection is.

The flamingo ornaments spawn in two of 6 different locations, all beyond the boundaries of the map, making the use of high-accuracy weapons almost required for the achievement. For their exact locations, consult this guide.

PLACEMENT:
On the hill outside the Garage.

"Ernesto Sosa didn't like it when you destroyed his car. Or when you killed him."
—Trophy description.

UNLOCK CONDITION:
Complete the Scarface Mansion job on the Mayhem difficulty or above in loud, with four players all using the Maniac perk deck and no skills. To complete this challenge, you have to have played the job from start to finish.

The World Is Yours

"The world, chico, and everything in it."
—Trophy description.

A minimum of ten sessions on this map is required to unlock the trophy since only two of the ornaments will spawn in a single match. Completing the heist is not required for the trophy progress to register.

The flamingo ornaments spawn in two of 6 different locations, all beyond the boundaries of the map, making the use of high-accuracy weapons almost required for the trophy. For their exact locations, consult this guide. 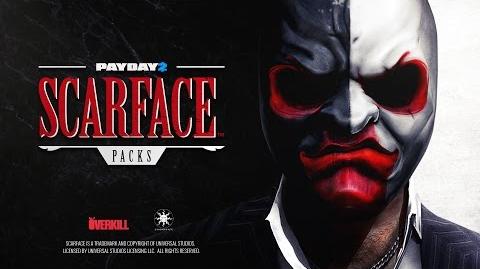