Shurikens are the fourth throwable weapon added to PAYDAY 2. They are part of the Gage Ninja Pack DLC.

The Shurikens have been coated in poison which deals damage over time and has a chance to interrupt enemies.

The effects of Poison do not stack, so repeatedly throwing Shurikens at an enemy will not grant additional damage from poison. The base 100 damage points will, however, stack as usual.

Shurikens are retrievable after use, thus skilled users effectively possess a theoretically endless supply. in practice, however, these stars often end up somewhere unreachable, rendering them lost. For this reason, it is advisable to refrain from throwing shurikens at Snipers or other distant targets.

Shurikens can poison enemies, disabling them temporarily and dealing damage over time. Enemies suffering the effects of Poison will stop and appear to claw at themselves uncomfortably. This effect can be used to halt most enemies, even Cloakers that are in the middle of charging a player. Bulldozers, however, are not affected.

These throwables are valuable when dealing with alerted guards on stealth heists. On higher difficulties, guards will be quite resistant to damage. If players shoot guards without killing them, the injured guards will usually return fire, alerting NPCs. If a Shuriken is thrown at a guard in an alerted state, the poison effect will render him temporarily unable to shoot or call the police, as well as kill him in the process.

Inventory preview of the Shuriken.

The Shurikens as seen in the Gage Ninja Pack trailer.

The Shurikens being used in stealth. 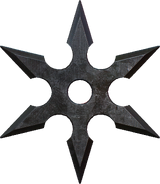 A Shuriken as shown on the announcement site.
Add a photo to this gallery
Retrieved from "https://payday.fandom.com/wiki/Shuriken?oldid=163740"
Community content is available under CC-BY-SA unless otherwise noted.