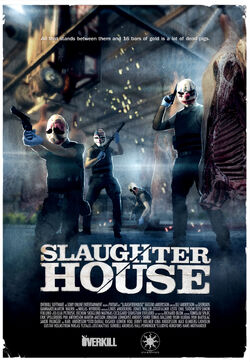 "All that stands between them and 16 bars of gold is a lot of dead pigs."
—Poster tagline.

Slaughterhouse is a heist in PAYDAY: The Heist. It involves the team attacking an armored car, breaking into it at a slaughterhouse and escaping through the container yard.

"We've got inside information on an upcoming gold transport. Only trouble is, the gold travels with a motorcade full of Murkywater mercenaries. An exploding car on the highway will force them to use the secondary route, giving us an ambush opportunity. We've got a shipping container waiting and some heavy smoke will keep the eye in the sky from figuring out where the gold goes."
—In-game description.

The heist begins with the crew in an apartment overlooking an alley that has been set up to take out an armored convoy. When the convoy arrives, a heavy loader smashes the truck containing the gold through the roof of a nearby slaughter house. After catching up with the truck and removing the safe with the gold, players must defend themselves from hired mercenaries and police while the drilling open the safe, fixing it when it jams. Once the safe is open, players must take the bags to a shipping container in the shipping yard in the back (this trip must be made four times in single player, as bots cannot carry objective related items).

After the gold is stowed away in the container, the players must set up a smokescreen with gas canisters found around the map to hide the container being lifted away. The crew then sets up a trap for the police before making their getaway in a vehicle containing the gold. 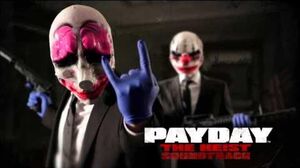