"All that stands between them and 16 bars of gold is a lot of dead pigs."
—Poster tagline.

Slaughterhouse is a heist from PAYDAY: The Heist introduced to PAYDAY 2 on day 9 of CrimeFest 2015. It involves the team attacking an armored car, breaking into it at a slaughterhouse and escaping through the container yard.

"We've got inside information on an upcoming gold transport. Only trouble is, the gold travels with a motorcade full of Murkywater mercenaries. An exploding car on the highway will force them to use the secondary route, giving us an ambush opportunity. We've got a shipping container waiting and some heavy smoke will keep the eye in the sky from figuring out where the gold goes."
—In-game description.

The heist begins with the crew in an apartment overlooking an alley that has been set up to take out an armored convoy. When the convoy arrives, a heavy loader smashes the truck containing the gold through the roof of a nearby slaughter house. After catching up with the truck and removing the safe with the gold, players must defend themselves from hired mercenaries and police while the drilling open the safe, fixing it when it jams. Once the safe is open, players must take the bags to a shipping container in the shipping yard in the back (this trip must be made four times in single player, as bots cannot carry objective related items).

After the gold is stowed away in the container, the players must set up a smokescreen with gas canisters found around the map to hide the container being lifted away. The crew then sets up a trap for the police before making their getaway in a vehicle containing the gold.

Like the original version, heisters will begin in an apartment room that overlooks the ambush. The Murkywater convoy can be seen approaching the area, with Bain confirming the surprise is ready. Players can either shoot the convoy or wait near the gate to reach the ground sooner. Shooting escort cars flips them, killing their passengers. Shooting the convo itself decides wheter or not the truck will hang or lands inside the Slaughterhouse. Multiple PMCs will attack the crew, with some of them heading down the stairwell in an attempt to breach the backdoor of the slaughterhouse facility.

One new change that becomes evident is a player must interact with a trash bin and obtain 4 C4 bombs, one of which is needed to breach the door. After that, players must eliminate or dominate the GenSec guards (one of which is stunned and the other is unconscious but will wake up after several seconds). The armored truck will either need to be blasted open or be shot down due to debris blocking it then blasted open. If the truck squeezes through the roof, be warned that there is a chance a Bulldozer may be present upon opening it and must be dispatched quickly. After this, a drill must be placed on the safe.

In the slaughterhouse, players are encouraged to tie down the civilians, find two gas cans that randomly spawn in the building, and obtain a keycard.

Eventually, Bain radios in that additional Murkywater PMCs have been sent and will use the shutter entrances. Technicians can set up sentries to easily eliminate them as enemies cannot defend themselves while sliding through. Soon, the police force arrives and an assault wave commences.

After the safe is opened, players must manually haul them to the container outside the slaughterhouse. They are quite heavy, thus be sure to throw the bags on the conveyor belts. It is highly recommended to use the keycard to close off the shutter entrance near the exit of the building to better ensure enemies won't haul the gold bags to the other side of the slaughterhouse.

Upon hauling the first gold bags out of the building, a SWAT van may ram itself through the left gate. On harder difficulties, it will deploy a turret, making it much harder to transport the heavy loot, especially if there are numerous enemies present.

Bain will inform heisters to drop the gas cans at a pile of tires to send the police helicopter away and within a container for the trap. The sooner players do this, the faster the containers will be moved. As the trap is being transferred, players can move the gold bags without wasting additional time.

Three additional civilians are around the container warehouse. Anyone with Stockholm Syndrome can easily intimidate them (and tie them down).

Unlike the original version, snipers will appear and attempt to incapacitate players. Captain Winters can also be summoned and will always stay near the SWAT Van (turret).

When the escape is initiated, players must find the blue colored containers to interact with the doors and proceed. Enemies will attempt to stop this, with a line of Shields to a Bulldozer. On occasion, a smoke grenade or/and a flashbang may be thrown thus disorientating heisters.

Upon reaching the last container, one player must manually ignite the gas can to escape. Be warned that if not killed previously, a sniper may attack that very player.

A traffic incident on the southbound I-45 resulted in a convoy belonging to the independent military contractors, Murkywater, being diverted from its path. Shortly after, it appears to have been attacked, and the main truck was forced off the road and into the meat-packing district. From there, the Payday gang managed to extract several articles from the truck - though Murkywater will not reveal what was stolen.

My Notes: Things are getting very heated between these two groups. Murkywater has operations all over the world, but they can’t fail to respond to these actions by Bain and his guys. Doubtless the Murkies will retaliate in some fashion. Perhaps we could coordinate with them? 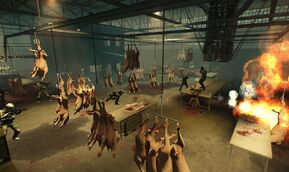 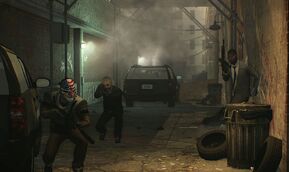 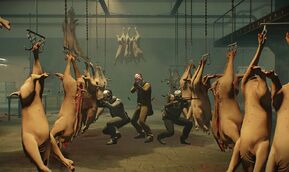 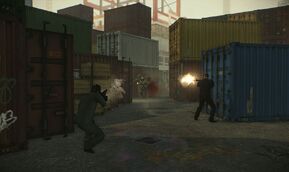 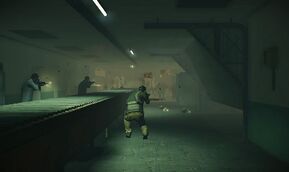 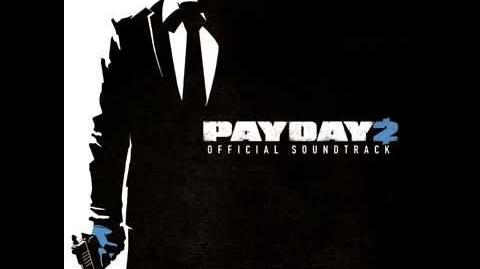