The Sokol Character Pack is a DLC pack for PAYDAY 2. It is also the fourth character DLC and the third purchasable one available. Released on June 25, 2015, it is available for purchase for Steam for $4.99 USD. It was released alongside The Golden Grin Casino Heist DLC.

Once you have bought the DLC, you will unlock the Sokol mask in your inventory, but you will have to obtain the Sokol Begins mask via card drops. They can be returned to your mask stash for free, but any pattern, color or material as well as the customization fee to put these together will be lost. 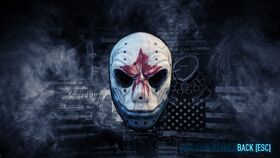 If playing as a grinder for the St Petersburg Bombers hockey team taught Sokol the value of one thing, it was the importance of a terrifying mask that protects his handsome Russian face.

THIS IS A SOKOL CHARACTER PACK ITEM! 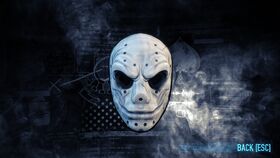 This is a clean version of Sokol's iconic mask, before it was painted.

THIS IS A SOKOL CHARACTER PACK ITEM!

The Grinder deck is inspired by ice hockey, where it reflects a strong work ethic, team play and a willingness to reduce an opponent into bloody fragments.

A typical grinder is a hard working individual, able to take control of difficult situations and turn them around.

The grinder relies heavily on always being in the front and dishing out punishment, being able to survive due to the fact that he does damage to the enemies regardless of how much damage he has sustained.

Retrieved from "https://payday.fandom.com/wiki/Sokol_Character_Pack?oldid=166970"
Community content is available under CC-BY-SA unless otherwise noted.