Sydney is an Australian Anarchist, and the 15th playable heister in PAYDAY 2. She was released on May 12, 2016. Like her predecessors Clover, Dragan, Sokol and Jiro, she was released in her own character pack, alongside the Bootleg rifle and Wing melee weapon. She is the third female heister, after Clover and Bonnie.

Kelli "Sydney" King is a troublesome and belligerent youth hailing from Melbourne, capital of the Australian state of Victoria. A former member of a delinquent gang called the Dingos, Sydney has a known history of violence and anarchy, and loves to wreak havoc and beating the living daylight out of people. At one point in her past, Sydney got her hands on the Bootleg, a smuggled assault rifle that has since become her trusty companion.

Ever the thrill seeker, Sydney traveled to Washington D.C. during the summer of 2016 and sought out the infamous Payday Gang. Intercepting them during a bank robbery, Sydney appointed herself a member on the spot, though her new friends seem to like her well enough and things went on without a hitch.

During her stay with the gang, Sydney discovers a hidden artistic side of herself: designing and crafting elaborate masks for everybody. 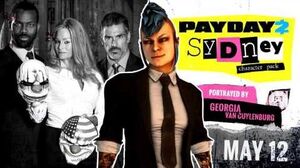 Artwork of Sydney for the Most Wanted DLC bundle for Crimewave Edition, along with Rust and Jimmy.
Русский
Community content is available under CC-BY-SA unless otherwise noted.
Advertisement