The Sydney Character Pack is a DLC pack for PAYDAY 2. It is the eighth character DLC and the fifth purchasable one available. It was released on May 12, 2016 for $4.99 USD.

Once you have bought the DLC, you will unlock the Sydney mask in your inventory, but you will have to obtain the Sydney Begins mask via card drops. They can be returned to your mask stash for free, but any pattern, color or material as well as the customization fee to put these together will be lost. 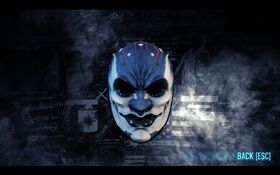 Smirk, Grin, Sneer - call it what you want. As you see this smiling punker mask approaching it's not synonyms that'll run through your head - it's bullets. Sydney will make sure of it.

THIS IS A SYDNEY CHARACTER PACK ITEM! 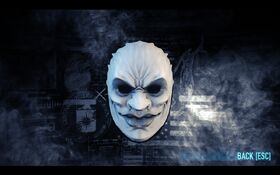 This is a clean version of Sydney's iconic mask, before it was painted.

THIS IS A SYDNEY CHARACTER PACK ITEM!

The Anarchist is someone who don't believe the cops are the ones who should dictate order and that people should be able to self-control themselves. Rebellious sabotage and violence are simply means to achieve a better end. The Anarchist never ducks out of a fight and will always withstand the punches. The Anarchist is a true asset as an Anarchist fights not just for money - but also as destruction is fun.

PAYDAY 2 Sydney Character Pack Teaser
Add a photo to this gallery
Retrieved from "https://payday.fandom.com/wiki/Sydney_Character_Pack?oldid=166967"
Community content is available under CC-BY-SA unless otherwise noted.