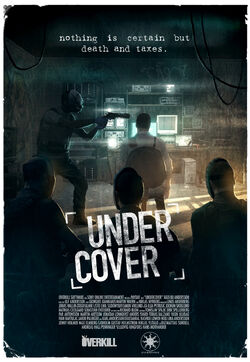 "Nothing is certain but death and taxes."
—Poster tagline

Undercover is one of two heists contained in the Wolf Pack DLC.

The Crew must take an IRS employee, only known as Mr. Sturr, or simply, the Taxman, hostage in order to hack into the IRS and steal $25,000,000.

"The taxman thought he was clever making a deal with a big corporation, but the information leaked, and now bigger sharks want in – all in. We have a complete, run-down building to ourselves, overlooking the deal. We've got a set-up installed. Alex will help with the crane scare the taxman into his limo, shake him up, and he'll be sure to give us the server and the codes. When it's about $25,000,000, anything goes."
—In-game description.

The crew begins overlooking a deal between the Taxman and "some big corporation". During this part of the heist, the crew is advised to find wooden planks throughout the apartment building and use them to board up windows, vents, and fences strategically throughout the building.

Eventually, the buyers will reveal themselves to be police. When this happens, the crew has a limited amount of time to react, as they will see them and begin the heist. Alex, operating a crane, will bring the limo the Taxman is hiding within, and try to lift it onto the roof of the building, though it is possible he may fail and drop it on the balcony, or it may fall through the roof.

When the Taxman has been taken from the limo and moved to the server room the crew has set up, the crew must regularly and violently interrogate him in order to get the three codes needed for the hack. Police will constantly try to shut off the power in order to stop the crew, who must turn it back on to resume the hack.

When the hack is complete, and the $25,000,000 is transferred, the crew must make their way to the roof, and escape via helicopter.

* Does not take place in every playthrough; depends on random variables (see walkthrough). 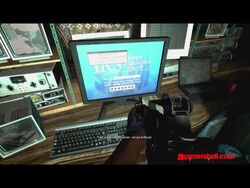 The 3-passcode hack into the IRS.

The leftmost stairwell, one of the possible points the limousine can end up in.