"You'll ride with the drugs. You'll ensure my product arrives in the harbor and makes it onto the speed boat. In the meantime, perhaps you can enjoy the refrigerated comfort of my meat truck and cool off a little, because the heat will be on. "
—Hector offering the heist.

Watchdogs is a two-day heist in PAYDAY 2.

Contracted by Hector, it involves the crew moving cocaine from an ambushed transport vehicle to the docks on the first day and loading the goods onto Hector's boat on the second day.

Since both days of the heist immediately open into loud combat, it is impossible to complete stealthily and no stealth bonuses are available for it.

The crew starts out inside a truck that is transporting Hector's cocaine, which has been ambushed by the police, forcing them to fight their way out. Under heavy fire, they have to move the cocaine from the truck to a nearby warehouse to wait until a secondary extraction vehicle can arrive. After holding out for several minutes, the vehicle arrives and the crew must throw the cocaine onto the vehicle.

At this point, Bain has arranged for a separate extraction vehicle to arrive for the crew. The Escape Driver can be targeted and killed by police. If the the crew doesn't kill the police firing at him, or they don't get to the escape zone before he is killed, the driver will die, and the crew will have to wait for Bain to call in Alex or Bile to extract the group via helicopter. After several more minutes, Alex or Bile arrives and positions himself nearby. The group must then fight their way to the helicopter and escape. Any bags of coke still carried by the crew onto the helicopter will spawn with them on day 2, instead of at the pickup truck near the police.

The crew is dropped off at the docks near the now-abandoned truck carrying the cocaine. If they were extracted via helicopter the previous day, Alex or Bile drops them off further away from the cocaine. On lower difficulties, several police officers will attempt to move the coke bags. On harder difficulties, a Skulldozer and a trio of Shields will be guarding the bags.

The crew must move to secure the cocaine (typically by carrying it to the nearby warehouse) before the police can repossess it. They must also turn on the searchlights that signal the boat to come, using a switch in the warehouse. The boat will arrive 2-3 minutes after the switch is pulled. Having one player at the start immediately go to the warehouse to do this will reduce the total time the team needs to wait for the boat.

There are three docks surrounding the warehouse, number 7, 8 and 9. The boat will show up at any one of these that is not blocked by a ship; it shows up at the same dock for every run within a heist. Sometimes dock 8 or 9 will be blocked by a ship which both prevents the boat from using that dock and serves as a spawn point for enemies.

Once the boat arrives, the crew can load the cocaine. The boat can carry only four bags at a time, this is indicated by the four barrels in the back. Be careful not to throw additional bags at the boat after it's full or they will fall into the sea, but the lost bag(s) will respawn at the truck where the coke was dropped off. Once loaded, the boat will leave with the cocaine, and the crew is left to defend the remaining bags.

Shortly after the the boat has left with the first load of cocaine, Alex returns with his helicopter to extract the crew. At this point the crew can either escape, carrying the additional bags of cocaine with them as they go or wait for the boat to return to do further runs.

This operation was conducted in cooperation with Hector Morales. The Payday gang were originally contracted to provide escort for a batch of Morales’ coke. The real purpose, however, was for them to be in a place and time of our choosing. Unfortunately, the Bureau underestimated the gang, who fought their way out of the ambush. However, it does not appear that the gang suspected the involvement of the Bureau. Morales directed them to a rendezvous at the nearby docks, where a second attempt to apprehend them was made.

My Notes: If there was ever a perfect opportunity to nail the Payday gang, this was it. Packed into a van, surrounded, we should have ended this there.

"You did this. You could do it a hundred times in a row, too."
—Trophy description.

UNLOCK CONDITION:
Complete the Watchdogs heist using only sniper rifles, with an accuracy of 100% or above. 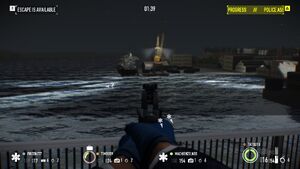 Retrieved from "https://payday.fandom.com/wiki/Watchdogs?oldid=183461"
Community content is available under CC-BY-SA unless otherwise noted.